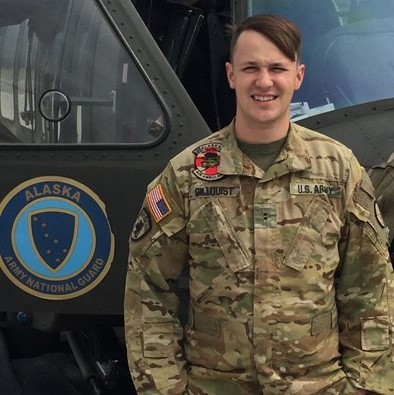 For three years since graduating from flight school, CW2 Gillquist had honed his piloting skills, waiting to put his training to the test with the Alaska Army National Guard.

It was a fall morning highlighted by clear blue skies when CW2 Gillquist and his medical evacuation team departed Bryant Army Airfield on Joint Base Elmendorf-Richardson. As fate would have it, on September 13, the aviator with the call sign “Icy 13” would answer the call he had been training for all those years.

“We all volunteered to be part of the medevac team to save lives and are constantly training to be the best we can be,” CW2 Gillquist says. “Real-world rescue missions are few and far between, so when the opportunity arises to put our training to use, we couldn't be more driven to accomplish the mission.”

Within 15 minutes of being alerted and receiving mission and weather briefings, CW2 Gillquist and his crew departed the airfield toward their designated grid.

When they arrived on location 20 minutes later, they hovered above a vacant wood line. There was no sign of the two hunters.

“We immediately began using a combination of clover patterns and focusing on areas that the crew thought would most likely attract or funnel lost hunters due to terrain,” CW2 Gillquist says. “We mainly focused on searching around the high ground areas that hunters like to shoot from, along with rivers and terrain features they could use to navigate home.”

Within minutes, the crew spotted two men below the aircraft. They anticipated a welcome response but found themselves in the middle of a potential misunderstanding.

“We realized that it was likely that the hunters didn't know we were there to rescue them,” CW2 Gillquist says. “They just looked up, waved once, and stood there. After an in-flight discussion, weighing our options, we realized there was one of two possible scenarios. Either these guys were the ones we were looking for, or we just ruined two other hunters' day.”

CW2 Gillquist and his crew decided to land, sending crew chief Staff Sergeant Sonny Cooper to verify if the men were the hunters they were looking for. To the crew's satisfaction, they were.

The flight medic, Sergeant William Bocast, advised CW2 Gillquist that the hunters were cold, wet, and hungry but did not require hospitalization. The crew flew the hunters to a gravel airstrip in Tyonek, where the men lived, before returning to Bryant Army Airfield. For the first time, CW2 Gillquist had the honor of being part of a real-world mission that, for him, was years in the making.

“I would never wish for any fellow Alaskans to get hurt or lost in this last frontier,” CW2 Gillquist says. “It is truly rewarding and an honor to be able to give back to the State by receiving these missions. We will learn and grow from this and take that experience on future deployments to bring a well-rounded level of expertise to the battlefield.”

CW2 Gillquist went on to say, “I'm super proud of my crew rising to the occasion and ensuring we got out the door quickly and safely. They performed the mission just as they train: professionally and efficiently.”

The Army National Guard gives you the opportunity to pursue a civilian career while serving part-time in your home State, so your family is always close by. With positions in more than 130 career fields, including aviation, you can find your perfect fit. Check out the job board for more information on available careers, and contact a local recruiter to learn more.

From an original article by the Alaska National Guard, which appeared in the news section of NationalGuard.mil in October 2020.