All Roads Lead to Career Success with Guard Service 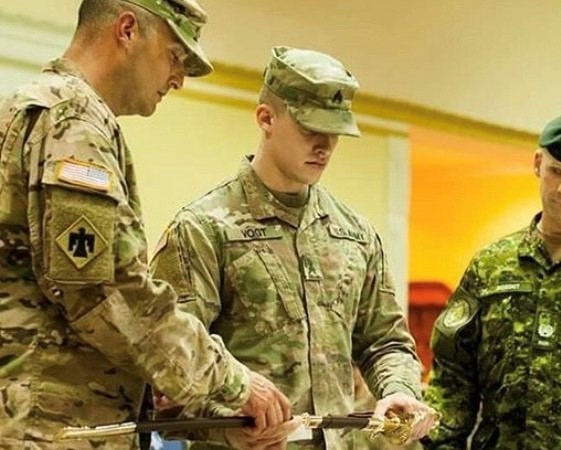 Sometimes you find yourself in a position that turns out to be completely different than where you thought you would be – it even happens in the Army National Guard.

Sergeant (SGT) Austin Vogt of the Oklahoma Army National Guard has navigated changes in direction throughout his service journey, but is focused on his destination – a successful civilian career.

For the last six years, he has served as a Food Service Specialist, primarily responsible for the preparation and service of food in field or garrison food service operations. Food service specialists must complete 10 weeks of Basic Combat Training and eight weeks of Advanced Individual Training with on-the-job instructions. Part of this time is spent in the classroom, and part takes place in the field, including practice in food preparation.

When he first joined the Army National Guard, he was offered several different positions that didn’t really appeal to his interests – Infantry, truck driver – and eventually was offered a job as a cook.

But his MOS wasn’t exactly what he expected.

“It sounded good at the time, until I got there,” SGT Vogt says. “It was more work and less sleep than I thought.”

Due to under-staffing, there were days when he found himself working from 1 a.m. to 11 p.m., including cleanup, running all shifts – except lunch, which was in the field. There were nights when he slept for just 45 minutes.

Eventually, he realized that being a cook probably wasn’t the best position for him. He was looking toward the future and wanted to set himself up for a successful civilian career with higher pay.

Instead of the kitchen, he set his sights on an IT career. “I thought if I had IT training, I could work my way up and eventually work as a contractor,” SGT Vogt says. Now he is about to transition to a career in communications as a Signal Support Systems Specialist.

Through the Army Relearning Certification Class, he is earning coins that act as a credit. “Courses are very expensive,” SGT Vogt explains. “These classes will help me when going after jobs and will open more doors for me.” He also plans to take advantage of the GI Bill for college courses.

SGT Vogt has been working toward his new goal in his civilian life as well. After spending the last two years in environmental and construction work, he recently took a job in life insurance sales.

“My goal right now is to absorb as much information as I can, to learn about the field and get hands-on experience.”

He sees his civilian career in sales as a segue.

“In the job market, you have to be able to sell yourself. I am learning a whole new vocabulary – and words to avoid,” SGT Vogt says. “I definitely think I am heading in the right direction.”

With career opportunities in more than 130 positions, the Army National Guard can help you find your perfect fit. Check out the job board for more information on available careers, and contact a local recruiter to learn more.