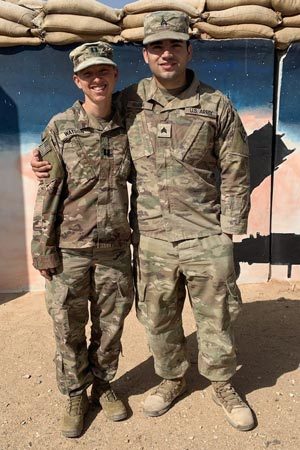 When you join the Army National Guard, you’re joining a team with purpose and setting yourself up for a successful future. You’re also making a commitment  ̶  to yourself and to your community. Continue reading to see how these family-member Soldiers serve their States and found each other while on deployment.

JORDAN – Being deployed is often full of firsts. For many, it is their first time in a new country, experiencing a different culture, and being away from family for an extended time. But the first deployment for two 111th Theater Engineer Brigade Soldiers led to something different – the first time seeing a family member in more than 12 years.

Captain Brittany Watson, a medical operations Officer in the 111th Engineer Brigade, and Sergeant Andres Rivera, a carpentry and masonry specialist in the 766th Engineer Company of the 111th, recently reunited during a deployment to the Middle East.

Their reunion was not an expected one, at least not for Rivera. Watson, who is stationed in Kuwait, received orders to travel to Jordan for an anthrax vaccination mission – it just so happened it was to the base where Rivera was stationed. Watson took this as the perfect opportunity to surprise Rivera and show up at his job site.

“When I first saw my nephew, we embraced in a long hug, which is something that you don’t often get on a deployment,” says Watson. “Our conversation flowed just like we had seen each other every day of our lives. It was perfect!”

For Rivera, the surprise visit by his aunt was something he never expected to happen.

“I didn't know how to act when I saw her. I had so many mixed feelings,” Rivera says. “It all just came naturally, like we had never spent any time apart. It made me feel very happy.”

Rivera, from Hialeah, Florida, knew he wanted to be a part of something larger than himself that could provide daily motivation. For him, the Army National Guard was the answer.

He was so eager to join, he enlisted when he was 17 years old and graduated Basic Combat Training the summer between his junior and senior years of high school.

“I was impatient and wanted to start working on something that was going to better me outside of just school, and so I joined the Army to get a foot up against my peers,” says Rivera. “The Army provided me with guidance and a motivation that I did not fully grasp yet. Once I joined, I realized my potential.”

“The Army is why I am successful today,” Rivera says. “There are a lot of different things I could’ve been doing, but none of them would compare to this choice I’ve made to serve in the United States Army.”

The decision to join the Army National Guard at such a young age was not one he made solely on his own. When he was exploring options to better himself, he had a role model in Watson and saw the opportunities the military provided her.

“When he was considering joining … he reached out to me to get my input. I’m not sure if he looked into joining because I served or if it was something he stumbled on with friends or in high school, but when he asked me, I encouraged him to go for it,” says Watson. “Andres was dealt an extremely difficult hand of cards from day one of his life. He overcame circumstances that defeat most people faced with the same, and I couldn’t be more proud of the man and Soldier he is today.”

Although Watson had always been there for Rivera, and they tried to stay in touch as much as possible on social media, Watson was still emotional when it came time to see Rivera in person for the first time in more than a decade.

“If I’m being honest, I was very nervous to actually get to spend some time with him,” Watson says. “I know that he thinks very highly of me and I didn’t want him to get to know me more and be let down.”

Fortunately, there was no being let down – for either of them.

“Our relationship now is as strong as ever. She constantly checks up on me and is always expressing her gratitude and love for me,” Rivera says. “She is proud of me and I am proud of her.”

Their relationship has strengthened because of this deployment, and Rivera says he has also developed and matured.

“Every person has a chance at greatness once they are put in this world,” Rivera says. “But it’s up to that person to become the best version of themselves.”

Rivera and Watson agreed they would make it a goal to visit each other more often and stay in touch when they are back in the United States.

“I know that when we return back home, we will continue to grow our relationship,” says Watson. “I have every intention of seeing him multiple times a year even though we live in two different States.”

If you’re looking to make a difference in your community, the Army National Guard is looking for you. The National Guard gives you the opportunity to pursue a civilian career while serving part-time in your home state, so you can stay close to your family and friends. With positions in more than 130 career fields, you can find your perfect fit. Check out the job board for more information on available careers and contact a local recruiter to learn more.

From an original article by James Mason, Army News Service, which appeared in the news section of nationalguard.mil in September 2021.