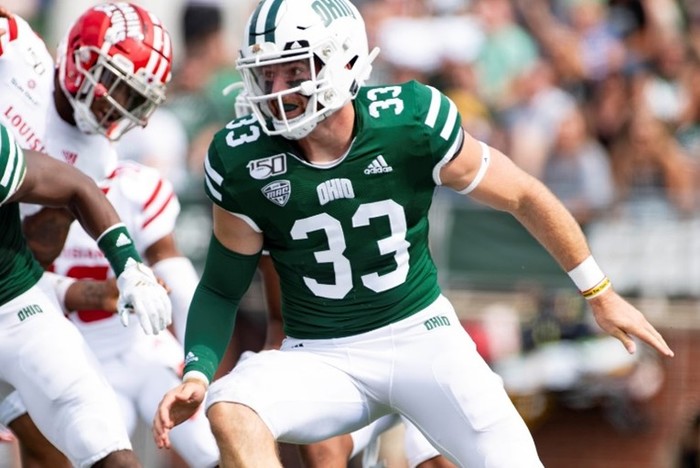 2LT King, like many other Ohio National Guard Soldiers, is also a college student.

He enlisted in May 2014 while still a senior at Sheridan High School in Thornville, Ohio, because he planned to go to Ohio University in Athens to wrestle. Without a scholarship, King needed a way to pay the tuition. Enlisting enabled him to do so.

Citizen-Soldiers earn benefits to help pay for education and expenses while serving their country and their community.

“My father recommended looking into the Guard to help pay for school, and I took that opportunity,” says 2LT King. “I also viewed it as a great way to serve my community and country.”

Once at Ohio, he joined the university’s Army ROTC program and was recently commissioned as a Second Lieutenant.

In early 2018, his roommate talked him into trying out for the football team — not much of a stretch since 2LT King played football in high school. His skills impressed the coaches, and he made the team as a walk-on. When an injury sidelined the starting long snapper during the first game of the season, he stepped into the position.

This year, he has the starting job and a full scholarship.

“I remember the week before the first game (last season) thinking, ‘Wow, I’m really playing (NCAA) Division I football,’” he says. “Stepping into that starting role full-time really meant a lot to me. I put in a lot of practice time during the summer, and it really paid off.”

2LT King graduated with a bachelor’s degree in health service administration in December 2018, and he’s on target to earn his master’s in coaching education. Next on his list of goals is to attend the Field Artillery Basic Officer Leader Course and play in the NFL.

Meanwhile, 2LT King continues to balance life as a Soldier and student-athlete, to be the best warrior-athlete he can be for both of his teams.

“I think there are a lot of great lessons and values the military can give you to help prepare you to be a student-athlete,” he says. “Working together as a cohesive team in the military to accomplish a task or mission can be directly carried over to sports, to help lead and bring teammates together to work toward the common goal we have of being conference champions and successful on the national scale.”

2LT King also credits his military experience for giving him the tools to handle time management and prioritize tasks.

His experience may have influenced his younger brother, Chance, who also enlisted. His brother, a Private First Class, earned recognition as a distinguished honor grad after completing basic training. He’s now at Advanced Individual Training to learn skills for his job as a 14G Air Defense Battle Management System Operator.

“Chance thinks very highly of me, as I do of him, and he has the same drive to go above and beyond expectations that are set for him,” says 2LT King. “I couldn't be more proud of him and the success he has had early in his career.”

2LT King has set an example for his brother as he finds success on the football field, in the classroom, and in the Ohio Army National Guard.

From an original article by Stephanie Beougher, Ohio National Guard, which appeared in the news section of NationalGuard.mil on Jan. 1, 2020.