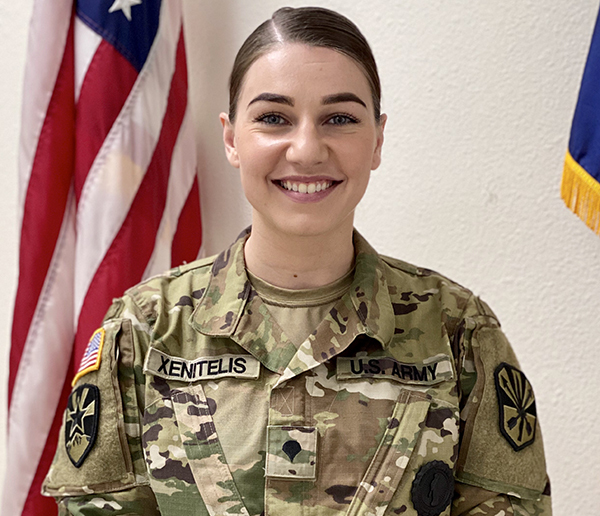 SPC Anna Xenitelis is a full-time recruiter in the Arizona Army National Guard who also serves as a 35F Intelligence Analyst.

There’s the pay, money for school, health care, and the ability to receive college credits for attending Army courses, to name a few. All of these things rate as fantastic in her book, “but for me, it really, truly is that you’re part of this giant family, and knowing that you have all these people around you, that no matter what happens, you’ll have someone to depend on at the end of the day.”

As a 35F Intelligence Analyst in the Arizona Army National Guard, Soldiers depend on her for the information they need to take action.

Last year, SPC Xenitelis spent nine months deployed to the Middle East in support of Operation Spartan Shield. Her job was “to collect information from a multitude of sources to create one big picture on what’s happening around me.”

She didn’t need to know Arabic – there are translators for that – but her mission involved a lot of legwork, reading up to 3,000 reports a day about what is happening in the region.

“You have to constantly educate yourself on the area,” says SPC Xenitelis. “In order to be successful, you have to understand the past first.”

That means understanding the history of a country, its relationships with other nations, its political and military standpoints, and how it treats its civilians.

SPC Xenitelis was recognized as Soldier of the Month by her Unit, the 198th Regional Support Group, for her work during the deployment, and performing above her rank.

Even more fulfilling was an assignment she took on voluntarily to help her brother’s Army National Guard Infantry unit, which was on deployment in Afghanistan at the same time.

“It’s probably the best feeling that I’ve felt in this whole world knowing that maybe I helped my brother and the people on his convoy.”

Born and raised in Hawaii, SPC Xenitelis comes from a military family.

A family friend’s stories about his job as a military intelligence officer got her interested in the intelligence field. SPC Xenitelis was especially interested in conducting interrogations, but she learned that she would have to work her way up first.

She decided to go for the 35F Military Occupational Specialty (MOS). She enlisted in the Guard at age 17, but not before doing her own independent, objective research like any good intelligence analyst would. She also sought opinions from Soldiers and Airmen she knew to get their perspectives on their particular service branches.

Last fall, as she prepared to come back from deployment, SPC Xenitelis started researching Active Guard Reserve (AGR) jobs, (full-time positions in the Guard). There wasn’t anything available in intelligence, but a recruiting job caught her eye.

“I love the Guard, and if I can get other people to join, that would be great.”

Prior to that, in her civilian life, SPC Xenitelis ran a photography business, and had been working in a salon, using her Guard education benefits to pay for cosmetology school.

Now she’s a Guard recruiter full-time, but she’s still serving as a 35F every drill weekend because she has no intention to give up working in intelligence.

“I absolutely love my job,” she says.

So as a recruiter and an intelligence analyst, SPC Xenitelis’s advice for anyone joining the Guard is not that surprising: talk to a recruiter, but also do your own independent research.

One of the things you’ll do during the enlistment process is find an MOS that suits you. For a look at all of the careers that are available in the Guard, the job board is a great place to start. The Guard offers more than 130 MOSs in fields ranging from technology and networking, to mechanics and maintenance, to engineering and more.

Contact your local recruiter for more information about serving part-time in the Guard, maybe even SPC Xenitelis, if you’re in the Mesa, Ariz., area.