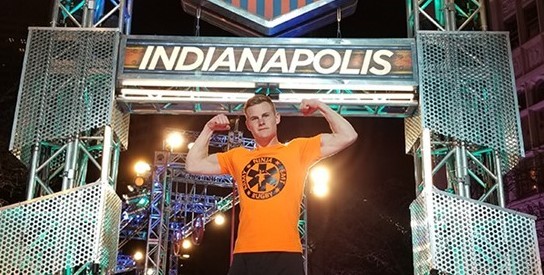 Michael Bougher didn’t exactly set out to conquer grueling obstacle courses on national television when he walked into a local gym three years ago.

The Indiana Army National Guard Sergeant was just looking for a way to stay in shape and have fun at the same time. This led him to a parkour class at the gym – only the class had been cancelled. Instead, he was invited to try out the first obstacle for the gym’s new Ninja Warrior class based on the popular NBC reality competition show, “American Ninja Warrior.”

“I’d always watched the show as a kid. I never thought I’d be a part of it,” he says. “I was really excited to give it a try, and actually ended up making it up the 14-foot warped wall on my very first try.”

That's all it took to get SGT Bougher hooked. He started helping the gym build more obstacles, which eventually led to testing obstacles for the actual TV show when it built a course in nearby Indianapolis.

Chosen to compete on the show for the first time in 2017, SGT Bougher came back stronger in 2018. He found himself hitting the buzzer with the best time in the “American Ninja Warrior” Indianapolis Qualifiers, earning a spot in the City Finals. There, he finished sixth overall, claiming a spot in the National Finals in Las Vegas,, which aired in September – without showing SGT Bougher’s run.

His bid to win the $1 million prize ended with a 15-foot fall into the water from the Double Dipper obstacle. There were various factors at play, but bottom line: “My head wasn’t in it.”

“There’s always next year,” says the 23-year-old. “I’ve just got to remember to keep my head a little bit better.”

If he’s invited back for season 11, you can spot him wearing his signature, self-designed orange T-shirt that gives a shout out “to pretty much everything that I do,” which besides the Ninja aspect, includes working as an EMT, playing on a rugby team and serving as a 35F Intelligence Analyst for the Indiana National Guard, which he joined as a junior in high school.

Looking back at enlisting in the Guard at age 17, “it was one of the best decisions I ever made in my life.”

Because Guard service is a part-time commitment, SGT Bougher has the flexibility to work full-time as an EMT, attend college full-time at Purdue University Fort Wayne, where he majors in criminal justice with a minor in psychology, volunteer at his local fire department, and teach a kids’ Ninja class, where one of his students is competing on “American Ninja Warrior Junior” on the Universal Kids Network.

“I have my life, and I have a family life,” he says. “I can still be a Soldier when I need to be, and that is great.”

Plus, the Guard “comes with a ton of benefits. They pay for my college 100 percent. I get the GI Bill, which helps to pay for books, and I can get as much additional training as I want to. I’ve been to some 400 hours of additional training for my MOS (military occupational specialty) specifically.”

As an Intelligence Analyst, his job is to take information from fellow analysts, infantry, or scouts who are gathering signals, human, or geospatial intelligence, and bring it all together.

“Essentially, I need to know everything that’s going on, be able to make sense of that information, understand why it is happening, and be able to brief it all to the Commander, as well as what we need to do about it.”

SGT Bougher got the chance to use his skills for a seven-month-long, real-life mission in Kosovo without having to leave Indiana.

“I’ve done a bunch of training, but it was really cool to see my work going toward something that’s actually happening.”

There are more military trainings in his future, too. Army Ranger School is on the horizon for next summer, and he’s taking on the Army Master Fitness Trainer course this month.

“I just want to go to every school that they can send me to.”

Because of his experience as an analyst, SGT Bougher believes that once he finishes his degree, he has a number of civilian career options, from working for the FBI or another three-letter government agency to working as a contractor overseas. But his end goal is to work in local police, fire, and EMS.

“I like helping the community around me, and I feel good about doing those jobs,” he says.

The desire to help his community is right in line with his service in the Guard, where a Soldier’s primary base of operation is in his or her own State.

SGT Bougher’s advice for anyone considering joining the Guard is to talk to a recruiter who will hopefully talk about the good aspects of service, but not shy away from anything negative.

So, if you are interested in a part-time job where you can serve your community and your country, and still have time to pursue a civilian career or other interests, our job board is a great place to start doing some research. Career fields include intelligence, engineering, mechanics and maintenance, military police, infantry, and more. Then, contact your local recruiter to learn more.