Guard Chaplain Says Serving Once a Month is Not Enough 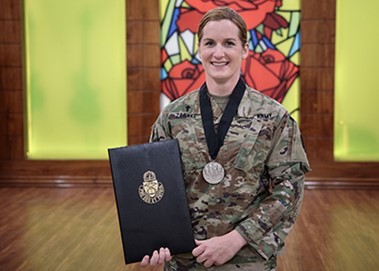 CPT Rachel Zarnke, Chaplain for the New Jersey Army National Guard’s 1st Squadron, 102nd Cavalry Regiment, displays The Four Chaplains Medal she was presented with in Jordan last June. The four chaplains – two Protestant ministers, a rabbi, and a Catholic priest – went down with the torpedoed USAT Dorchester during World War II, giving up their own life preservers so others might survive. (Photo by SFC Brian A. Barbour, Army National Guard.)

Captain (CPT) Rachel Zarnke loves serving as a Chaplain in the Army National Guard so much that coming to drill “one weekend a month is not enough.”

“I love being an Army Chaplain,” she says. “I love the mission. I just want to do it every day.”

The 33-year-old Soldier is joining the active duty Army this summer so she can serve full-time, but after eight years with the New Jersey Army National Guard, she leaves on many high notes.

One is being awarded with the Four Chaplains Medal in 2019, which is presented to one Army Chaplain a year for “collegial selfless behavior while rendering religious support to the military community regardless of faith or race.” For that, she thanks her first Unit – the 104th Brigade Engineer Battalion –because “they grew me and taught me what it meant to be a Chaplain.”

Another is a 9-month deployment to Jordan with the 102nd Calvary Regiment, where she learned it was OK to take this next step in her career. Her mission there was to support Soldiers of any faith or no faith at all and be their “morality, ethical, and spiritual touchstone,” she says.

“When deployed, you are absent normal touchstones,” she explains. “It can become disorienting very quickly. Having a Chaplain able to reorient people on their values, their goals, and what is real, and what is just sort of the fog of the deployment is important.”

As a Christian minister, CPT Zarnke represents her faith tradition, but to help Soldiers of different or no faith, she listens and asks Soldiers how their spiritual traditions or their value sets might instruct them to resolve a problem. During the deployment, if she felt a Soldier needed support beyond what she could provide, she referred them to other resources as necessary.

“Being in a place where God has been is very important to me, so to be able to share that part of my faith with my Soldiers was incredible.”

CPT Zarnke, an Illinois native, was in seminary school at Princeton when she decided to join the military. Since she was a full-time student, the Guard was the perfect branch to join because service is part-time. CPT Zarnke also served as a minister in a Lutheran church in New Jersey for 3 1/2 years.

The military, she says, showed her there were infinite ways to serve.

“I don’t like to play the demographic game, but when you are a young female, trying to step up and lead in a church, no one wants to listen to you. Not intentionally, it’s just not a voice people are used to deferring to. The Army teaches you to stay in your lane – to know what you know and to lead. It was a life-changing experience.”

CPT Zarnke especially likes working with younger Soldiers who are still figuring out who they are.

“I think a Soldier’s heart is amazing. They are so selfless, and so honorable, and to be able to support them in their moments of need really means a lot to me.”

In her first domestic mission, CPT Zarnke lent her support during Hurricane Sandy in 2012, providing what she calls “ministry of presence –  just being there for your Soldiers,” whether it’s to thank them on behalf of the citizens of New Jersey for responding to the devastating storm, being a safe person to talk to or pray with, or to provide them with the Eucharist because many churches were closed.

At drill, her job is to get to know the 300 to 400 Soldiers in her Unit and provide worship services and Bible studies, but her most fulfilling mission is “whenever I’m called outside of drill and there’s a need I can meet.” That could mean meeting up with a Soldier in a hospital, a coffee shop, or a laundromat to lend her support.

When CPT Zarnke looks back on her early days in the Guard, she says she had no idea what she’d gotten herself into, but “the Army will teach you what it needs from you. I could never repay the Army for everything it’s given me. It is an incredible community.”

If you’re interested in joining a community of dedicated women and men who serve both their communities and their country, Guard service comes with benefits that go beyond personal fulfillment. You’ll train for a career in one of 130 specialties, including everything from Administrative jobs to Police and Protection roles to serving on the front lines as part of Ground Forces. Guard Soldiers are also eligible for money for college, low-cost health and life insurance, and more.

Contact your local recruiter for more information about the Army National Guard.