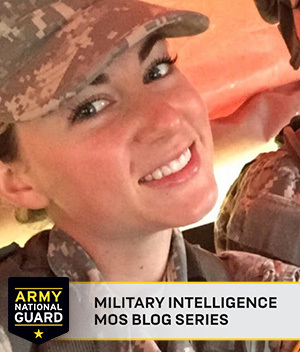 The Army National Guard offers many career training opportunities in intelligence-related positions. Who are these men and women known as Intelligence Specialists? Let’s find out. In this series, Mission: Possible, we talk to Soldiers and uncover what it’s really like to be one of the National Guard’s biggest assets.

Working as a Counterintelligence Agent for the Army National Guard is something Sergeant (SGT) Sarah Rhodes never imagined herself doing.

Before she joined the National Guard, this self-described “girly-girl” was in college and struggling to find a way to manage a mountain of student debt. She was studying criminal justice with an eye toward meaningful reform – both prison reform and helping juveniles to reform their lives.

Facing a pile of student debt, she was concerned for her future. “I looked at my friends who were struggling to find good jobs, even after earning their degrees,” she says.

Inspired by her stepfather and brother, who both served in the National Guard, she decided to join not only for the National Guard’s education benefits, but by serving part-time also set herself up for success in her civilian career.

“I didn’t really understand the position at the time, but I knew it would lead to a great job opportunity,” she says. The position requires a top-secret security clearance, which she knew would give her a competitive edge in the job market and lead to many interesting career opportunities.

After six years in the same job specialty and facing a reenlistment decision, she knew it was time for a change.

“I liked it, but I wasn’t really passionate about it,” she says of her position. “I liked the mission, but I wanted to do something that was more hands-on and interactive.”

Curious about opportunities in counterintelligence, she started talking to other Soldiers in her unit who served in that capacity. She was especially interested in the Threat Awareness Reporting Program (TARP) briefings given by Counterintelligence Agents.

“I wanted to help and try to do my part to prevent incidents like those we were briefed on from happening,” she says. “I also wanted to transition into a more interactive intelligence role and contribute to preserving national security.”

SGT Rhodes reenlisted and is now a Counterintelligence Agent with the Maryland Army National Guard.

As she had planned, her part-time National Guard service is helping to boost her civilian career. She has worked as a Cloud Engineer and now specializes in anti-terrorism activities in the Dark Web. Currently she works full-time for the government and assists with their counterintelligence mission every day. She hopes to attend the National Intelligence University’s Master of Science of Strategic Intelligence (MSSI) Program to further enhance her skills and education in the intelligence field.

SGT Rhodes appreciates that her service in the National Guard offers her a way to serve her community. Recently her unit helped with COVID-19 support missions.

“I feel like the longer I stay in the National Guard, the more I can give back to the community.”

The Army National Guard gives you the opportunity to pursue a civilian career while serving part-time in your home state, so you can stay close to your family and friends. With positions in more than 130 career fields, you can find your perfect fit. Check out the job board for more information on available careers, and contact a local recruiter to learn more.