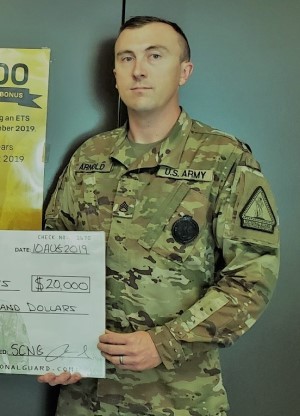 SSG John Arnold’s journey in the Army National Guard has taken him around the world and includes everything from working on multimillion-dollar boats in South Carolina to touring an ice cream factory in Afghanistan.

One of the main reasons SSG John Arnold joined the South Carolina Army National Guard was to get away from the 9-to-5 grind.

His journey in the Army National Guard has taken him around the world and includes everything from working on multimillion-dollar boats in South Carolina to touring an ice cream factory in Afghanistan.

Though he’s had vastly different and wide-ranging experiences over his 10 years in the Army National Guard, one thing ties them all together: teamwork, discipline, the desire to succeed, and the willingness to learn something new.

When SSG Arnold joined the Army National Guard, he was 26 and had an associate degree from a small technical college. He knew what he wanted: a sense of purpose. He also knew what he didn’t want: to work in a typical office environment.

He explored joining the military and passed up the other branches to join the Army National Guard.

“I loved the dual-mission aspect. We not only protect our own State and homeland, but we also travel abroad for peacetime and combat missions,” says SSG Arnold. “We’re the ‘jack-of-all-trades’ branch of the military and I absolutely love it.”

His first MOS in the Army National Guard was 12B (Combat Engineer). To learn even more skills, he transitioned to several other MOSs, including 12R (Interior Electrician), and 12H (Senior Construction Supervisor).

“Another aspect I love about Guard life is I was able to change my MOS, which is tough to do in other branches of the military,” says SSG Arnold.

As he moved through different jobs in the Army National Guard, he took advantage of opportunities he encountered. The first was using the South Carolina Army National Guard’s Employer Assistance Team to get a job with a boat company. Another Soldier in his Unit was already employed there.

“I feel like my Guard experience played a major factor in getting hired,” says SSG Arnold. “It showed the company that I was disciplined, mechanically inclined with an electrical background, and that I was reliable.”

He was responsible for all the electrical components on each boat. Though he says it was “stressful and challenging” working on extremely expensive boats – “One screwup, I could fry an entire wiring harness and its components – he felt satisfaction when each job was finished.

Though he wasn’t able to accompany his unit to Puerto Rico after Hurricane Maria devastated the island (he had just received a promotion), he cheered them from afar. He was able to take advantage of deployments to Columbia, SC, to strengthen dams and remove debris from residential areas during torrential flooding and Kandahar, Afghanistan, to build guard towers and cafeteria buildings, deconstruct forward operating bases, and ensure the safe transition from American forces to the Afghan National Army or local police.

It was in Kandahar, during what he calls his most fulfilling mission, that he encountered the ice cream factory.

“We did not get to taste the ice cream, however, the owner got to taste some American dip,” he says.

Though the ice cream factory was memorable, the impact he feels he made while there stands out more.

“We turned the land back over to the local tribal landowners who were, in turn, grateful and thankful for what the American forces had done in the area,” says SSG Arnold.

These are the types of experiences he gets to share every day in his newest role in recruitment. He also gets to speak with potential recruits about the benefits of service in the Army National Guard.

“The Army National Guard will teach you all of the skills you need during your AIT (Advanced Individual Training) school for your chosen MOS. To learn your MOS, all you have to have is the drive and desire to learn something new,” he says.

He also credits the Army National Guard with giving him self-assurance that will last his entire lifetime:

“Since joining, I’ve had the confidence to be able to take on anything life might throw at me, knowing I will take care of it.”

If you feel a calling to do more in life and give back to your community, check out the Army National Guard, where you’ll serve part-time and receive training in one of more than 130 careers in fields like Supply and Logistics, Heavy Weapons, Ground Forces, and Administrative Careers. For details on any MOS, search our job board for more information on available careers, and contact a local recruiter to learn more.