Guard Helicopter Pilot: ‘The Sky Is Actually Not the Limit’ 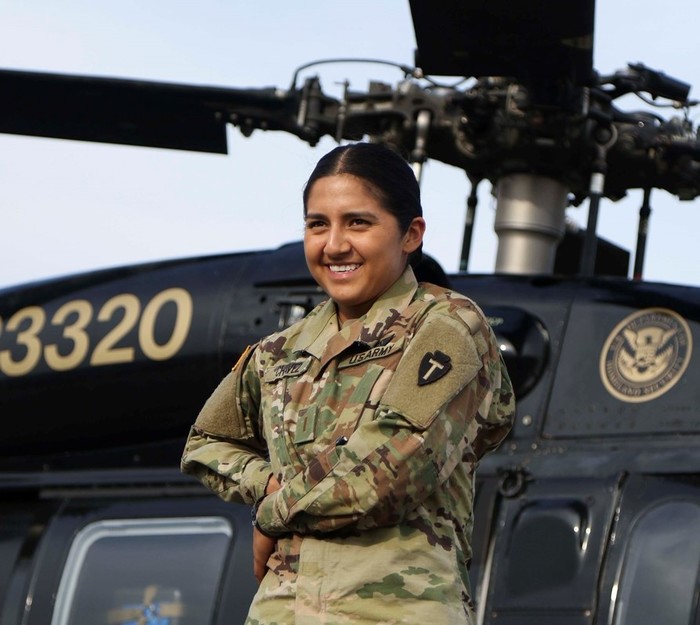 MCALLEN, Texas — In a small barbed-wire enclosed yard in Tamaulipas, Mexico, three hours south of the Texas-Mexico border, 6-year-old Liliana Chavez Uribe marveled at the sight of crop dusters flying over her home and dreamed that one day she, too, could fly.

A short 18 years later, Second Lieutenant (2LT) Liliana Chavez Uribe smiles as she recalls the memory that propelled her forward and ever upward.

“I grew up in a rural area where we didn't have running water – we had wells,” 2LT Chavez, 24, says. “We had outhouses, so, no toilets, and the first time I saw a shower I was in second or third grade – I grew up in the projects.”

2LT Chavez, now an Aeromedical Evacuation Officer, 2nd Battalion, 149th Aviation Regiment, General Support Aviation Battalion, who flies Black Hawk and Lakota helicopters for the Texas Army National Guard, says her accomplishments are far beyond what her 6-year-old self could have imagined.

“I have been wanting to fly since the first time I saw an airplane, but I kind of put that dream aside, since I thought it was very competitive. It was like dreaming to be a movie star ­– you put it aside because you think it will never happen.”

Despite the obstacles she and her family endured as immigrants during their journey, 2LT Chavez realized her dreams were more of a reality than she thought.

“I came here as a permanent resident,” she says. “My dad worked his butt off to get us all here the correct, legal way, and now I am a citizen.”

It was during her high school years in Pharr, Texas, that 2LT Chavez discovered her love for the disciplined military structure when she joined the Junior Reserve Officer Training Corps.

She graduated fifth in her high school class with an associate degree under her belt and landed a two-year Texas Armed Services scholarship to the University of Texas Pan-American, where she joined the Reserve Officer Training Corps (ROTC) and studied biology.

“In ROTC I got the opportunity to go up for the aviation board,” 2LT Chavez says. “I put in the packet, took a physical fitness test, went before a whole bunch of important people and was selected.”

SERE is a requirement for all pilots and U.S. Special Forces that tests participants’ mental and physical fortitude to prepare them to evade capture and survive extreme conditions and unforgiving elements.

2LT Chavez says that SERE training was the most challenging experience she has faced in her life.

“My lowest moment (during the training), I can’t say it, but it was really, really low,” she says. “But I started laughing, even though there were tears coming out of my eyes. It was tough, but I always had a positive attitude. I tried to sing and make something positive out of a crappy situation.”

2LT Chavez credits her father’s work ethic as the reason she is so driven to overcome the multitude of challenges she faced during SERE training.

“My dad, he is really motivating. He works in construction, in roofing. He would come back home just burned and blistered – every day, non-stop, and he never complained.”

‘I Embrace Every Stereotype'

2LT Chavez remembers being one of three women and the only Hispanic woman in her flight school class.

“There is a challenge in being a Hispanic woman and being a minority – that’s two things,” she says. “But now, I think it’s a great thing, because we can actually go all the way to the top.”

The pilot says that she overcomes discrimination the same way that she conquered her challenges during SERE training – with a splash of humor.

“I just play along with it, and I say ‘so what? I don’t care, I’ll make you tacos right now,’” 2LT Chavez says. “I’ll prove a point, I’m Mexican, I’ll braid my hair. I embrace every stereotype, and I think that’s the way to do it instead of being thin-skinned.”

Regardless of all the obstacles she has faced, whether it was getting through college, financial setbacks, discrimination or SERE, 2LT Chavez never saw failure as an option.

“My main drive was not to disappoint my father. I wanted to finish school and do amazing things for myself and him, also. I want to eventually pay him back for all he has done for us.”

2LT Chavez, a lean five-and-a-half-feet tall, walks ruler-straight and with purpose, radiating positivity while also having a steadfast command presence.

“The leader I hope to be – I expect to touch many, many lives,” she says. “I am already a joyful leader, always looking at the positive side. I am always smiling. I don't want to be bitter. If you aren’t happy and have a moody face that is contagious.”

When 2LT Chavez talks about her job and flying, her face lights up, and her voice exudes an energetic tone which proves that long after achieving her dream of flying, she is still filled with the same wonder and awe she had watching the crop dusters as a young girl.

The pilot reflected upon where she would be in life had her father not moved their family to the United States.

“I would be living a sad life, probably with like, five kids, not in school, not educated or maybe something even worse – just the way stuff is down there.”

“If we hadn't come here, nothing would be different,” Chavez said. “Liliana serves as an example that if you work hard and persevere you can get to where you want to be, and if Lily were in Mexico, she would move somewhere else and still succeed because that is the way she is.”

Many Dreams Left to Fulfill

Although she has reached what her family and many people would see as the pinnacle of success, 2LT Chavez says she still has many dreams to fulfill.

“My other plan is to go back to school for earth and coastal sciences, diving and studying earth forms. I want to be an astronaut, too, one day.”

Chavez has a message for other girls who have big “movie star dreams” like hers.

“I’d tell them don’t limit yourself, the sky is actually not the limit – you can be an astronaut if you want to.”

So, if you’re ready to test your limits, the Army National Guard offers plenty of options, right in your own community, where you’ll maintain your military training on a part-time basis. This flexibility gives you time to pursue a civilian career, too, which can be accomplished a lot easier when you take advantage of the Guard’s education benefits.

Check out our job board, which can be searched by location or the type of career you’re interested in from aviation to armor and field artillery, to military police, logistics support and more. For personalized advice, contact your local recruiter.

From an original story by 1LT Nadine Wiley De Moura, 100th Mobile Public Affairs Detachment, which appeared in the news section of NationalGuard.mil, in May 2018.