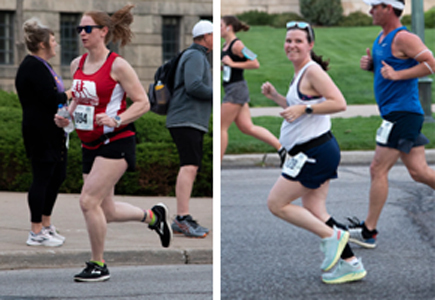 MAJ Amanda Schmid (left), a helicopter pilot and full-time administrative officer with the Nebraska Army National Guard’s 1-376th Aviation Battalion, ran in the Lincoln half-marathon. This is the second time Schmid has run in the marathon while pregnant. 1LT Brittany Downs (right), an engineer officer with the 945th Engineer Company of the Ohio Army National Guard, also ran in the Lincoln Half-Marathon. (Photos by Senior Airman Jamie Titus)

When you join the Army National Guard, you’re joining a team with purpose and setting yourself up for a successful future. You’re also making a commitment  ̶  to yourself and your community. Read how these Soldiers serve their country and challenge themselves.

–  LINCOLN, Neb. – Serving in the Army National Guard, raising a family, and keeping up a marathon training regimen would be a lot to manage under normal circumstances. Still, two women in the ranks have managed to do all the above while preparing for the arrival of new babies.

Major (MAJ) Amanda Schmid of Nebraska and 1st Lieutenant (1LT) Brittany Downs of Ohio decided to continue training with the Army National Guard marathon program during their pregnancies. Both women represented their States alongside their fellow Guard marathoners competing in the 2021 Lincoln Marathon and Half-Marathon held in Lincoln, Nebraska, May 2.

For Schmid, a helicopter pilot serving full-time as the administrative officer for the Nebraska Army National Guard’s 1-376th Aviation Battalion, it was her second time running in the Lincoln half-marathon while pregnant.

Knowing that her pregnancy would be about eight months along when the race kicked off, Schmid decided that it was important for her overall health to continue her running passion.

“It’s just a part of me. Being in this community and this family,” Schmid said of the Army National Guard Marathon program. “It’s fun to be able to come back with so many people who have done this year after year and seeing all the friends that we’ve made over the years.”

Although she planned to walk the half-marathon as she did last time she was pregnant, she ended up running the whole way.

“I always try to run whenever I can, so with my last pregnancy and with this current pregnancy, I just ran until I couldn’t anymore,” Schmid said. “It went well. I felt good most of the way, so I was pleased with that and to be able to finish.”

For Downs, an engineer officer with the 945th Engineer Company of the Ohio Army National Guard, this was her first time attempting a half-marathon.

Though she joined the Ohio marathon team in 2019, the COVID-19 pandemic soon caused many changes to athletic events throughout the United States, including the cancellation of the 2020 Lincoln Marathon.

“I wanted to run the Lincoln marathon before, but I was pregnant last time [2019], and then COVID-19 happened,” Downs said. “This one came around, and I started training before I knew I was pregnant. Once I found out, I was only eight weeks along, so I thought ‘I’ll be fine,’ and continued training.”

While attempting the Lincoln half-marathon at seven months pregnant, Downs ran the first eight miles but elected to stop at that point due to some discomfort.

“I just wanted to be safe, but I wish I would have finished,” Downs said.

Each runner faced their own set of challenges preparing for the half-marathon. Still, both Schmid and Downs said they found treadmills helpful for logging miles at home whenever they had the chance, particularly during the extreme cold weather in February 2020 and limited access to training facilities at times during the pandemic.

The biggest challenge for Downs during the training process was making time to run while taking care of her two children, ages three and one. Having a treadmill allowed her to run and take care of her kids. She scheduled her longer runs for weekend mornings while her husband stayed home.

Downs also had to buy new running shoes after her feet grew due to the pregnancy. Thankfully she had enough time to break them in before the Lincoln race, she said.

In Schmid’s case, the most challenging part of the training was finding a safe place to train while many gyms were closed or restricted due to the pandemic, so she bought a treadmill.

She says running during pregnancy is a lot tougher physically, mainly because she finds it harder to breathe.

“I try to stick with my normal training plan, but I just don’t necessarily go as hard,” Schmid said. “I listen to my body a lot more, and it’s just more of an exercise to maintain my health than be competitive out there.”

Both women say they plan to continue running and hope to compete in the Lincoln Marathon again in future years.

“I like the Lincoln race. It’s really fun and well supported,” Schmid said. “To be able to do it in any capacity is something I’m going to strive for, so I will continue to participate.”

If you’re looking to make a difference in your community, the Army National Guard is looking for you. The National Guard gives you the opportunity to pursue a civilian career while serving part-time in your home State, so you can stay close to your family and friends. With positions in more than 130 career fields, you can find your perfect fit. Check out the job board for more information on available careers and contact a local recruiter to learn more.

From an original article by Senior Airman Jamie Titus, Nebraska Army National Guard, which appeared in the news section of nationalguard.mil on May 7, 2021.