Guard Offering $20k for Certain Jobs, but Benefits of Service Go Beyond the Bonus, Says Recruiter 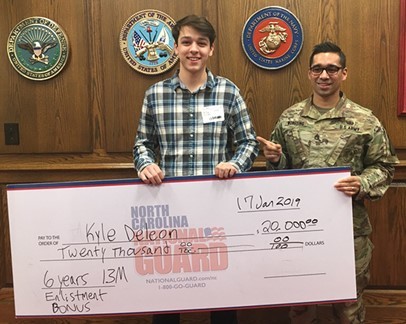 Kyle Deleon, left, is one of the newest members of the North Carolina Army National Guard. Recruited by SSG Phillip Wongsing, right, Kyle received a $20,000 bonus for enlisting as a 13M Multiple Launch Rocket System (MLRS) Crewmember in January.

Out of the approximately 130 jobs you can do in the Army National Guard, there’s a list of a dozen or so of these jobs in every State that is offering new enlistees a $20,000 bonus right now.

Staff Sergeant (SSG) Phillip Wongsing, a recruiter for the North Carolina Army National Guard, is quick to clear up any misconceptions that the military occupational specialties (MOSs) that make the list are jobs that no one wants to do.

“You get everything from plumbing to aviation to infantry to armor,” he says. “These are really good jobs – a variety of jobs in different career fields.”

The list varies from State to State and changes on a quarterly basis.

“It’s based on what the State needs at the moment to fill in positions, so we don’t have critical vulnerabilities within our organization,” says SSG Wongsing.

For example, as of this month in North Carolina, bonuses are available for 17 jobs this quarter. Here are just a few examples to demonstrate the variety:

The bonus is tied to a score of at least 50 on the ASVAB and to a 6-year enlistment in the Army National Guard, says SSG Wongsing. And, by the way, that’s six years of part-time service – as little as one weekend a month for drill and two weeks in the summer for annual training.

Here’s how the bonus works: Soldiers receive half the money when they successfully complete Basic Training and Advanced Individual Training. On their third-year anniversary they receive another quarter of the bonus. The final quarter arrives for their fifth anniversary.

But even if the MOS you want doesn’t come with a bonus, there are other financial incentives to think about. One is money for college. Because Army National Guard Soldiers have a dual mission to serve the State and the Nation, Soldiers can take advantage of both State and federal tuition assistance. SSG Wongsing says the North Carolina Army National Guard offers:

Affordable health insurance offered through the Guard is another way to save money. At $42 a month for medical and about $11 a month for dental, SSG Wongsing estimates that single North Carolina Guard Soldiers are paying about a quarter of what their civilian counterparts do.

Of course, money isn’t everything. Doing a job you like has its own rewards.

One of SSG Wongsing’s recent recruits may not have gotten a $20,000 bonus for enlisting as an 15Q Air Traffic Control Operator, but by the time he graduates college, he’ll have five years of paid training and experience in his field, which applies directly to a civilian career.

There are other motivations to serve in the Guard, too.

“If you have a heart for humanitarian work and adventure, then the National Guard is the place to be,” says SSG Wongsing, who helped distribute supplies to residents displaced by two hurricanes that hit North Carolina in 2018. The Guard also helped with evacuations, water rescues and storm clean up.

“You directly have a hand in the rehabilitation of your community and helping people in a time of stress,” he says.

If you’re into travel, there are opportunities to attend trainings in other States or countries. The North Carolina Guard, for example, is partnered with Botswana and Moldova through the State Partnership Program.

There’s also some friendly competition among the ranks. SSG Wongsing’s former armor company for example, won the Sullivan Cup in 2016, competing against the Marines and other Army units for the best tank crew, and then went on to finish third in an international competition. Last year, the New York Army National Guard sent athletes to the Winter Olympics, and then, there’s the annual Best Warrior Competition, a test of a Soldier’s knowledge and physical endurance.

And while most Soldiers serve part-time and have civilian jobs or go to school, there are also full-time jobs available in the Guard.

“The Guard is what you make of it,” says SSG Wongsing. “If you want to go to school full-time, and you still want to serve your community, have self-sovereignty in your life, and serve something bigger than yourself, the National Guard is a great opportunity to have two different lifestyles – the civilian and military that supplement each other.”

So, if you’re interested in what the Guard has to offer, our job board is a great place to start. You can search by keyword, State, or career field, such as logistics, administration, engineering, intelligence, and more. For information about enlistment bonuses and benefits available in your State, contact your local recruiter.