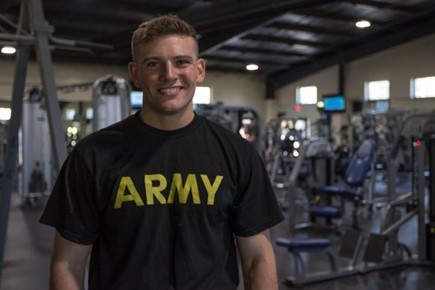 2LT Bryan Abell recently commissioned as an Infantry Officer in the Michigan Army National Guard through ROTC at Michigan State.

Second Lieutenant (2LT) Bryan Abell says he’s made a few decisions that he doesn’t have a solid explanation for – one of them was joining the military without knowing much about it, other than what he’d seen in the movies. Another was his successful attempt to break a Guinness World Record for doing the most chest-to-ground burpees in a 12-hour period. The inspiration was a YouTube video he just happened to catch about someone who’d broken a record for most burpees in an hour.

These days, the recent college graduate is finding more meaning and more purpose in the things he does, and he gives most of the credit for that to his experiences serving in the Michigan Army National Guard. The 24-year-old just commissioned as an Officer in the Guard in December through his participation in ROTC at Michigan State University.

Between finishing up his finance degree and serving as an 11B Infantryman in the Michigan Army National Guard’s 1/126th Infantry Battalion as part of the Guard’s Simultaneous Membership Program, he also found time during his senior year to start a non-profit organization, the Stronger Warrior Foundation, with his sister, Katelyn.

“We wanted it to be a military-based organization; it’s an amazing community that doesn’t get thanked enough for what they do,” says 2LT Abell. “It’s one thing to say, ‘Thank you for your service.’ We wanted to have an impact that wasn’t just surface level.”

Stronger Warrior Foundation creates care packages for deployed Soldiers. Items are contained in hand-built wooden crates that can be decorated by a sponsor, who can also send written or video messages to the recipients.

2LT Abell is also putting his pursuit of another world’s record – this time for most burpees in an hour – toward raising money for his charity. You can catch the action live on Stronger Warrior’s website at 4 p.m. Eastern, Saturday, March 21.

Part of the inspiration to do something that helps veterans came from 2LT Abell’s experience as an ROTC Cadet training in Honduras, where he rucked alongside the Honduran military through villages with mud huts and no running water.

“It was a humbling experience to see how lucky we [Americans] are and how lucky our military is.”

ROTC also gave him the opportunity to participate in Air Assault School and compete against seven other international ROTC teams at the Ranger Challenge, held at The U.S. Military Academy.

Army ROTC allows Cadets to choose between Active Duty or National Guard assignments once they commission. 2LT Abell is staying in the Guard, though he had considered switching from Infantry Officer to Financial Manager Officer. His training at Fort Benning, Ga., home of the infantry, cemented that decision.

“I absolutely just fell in love with everything about the Infantry. The history, the ancestry of the Infantry, the lineage that you’re following after – it’s something very special.”

Staying in the Guard also means he can serve part-time and close to home in his new Unit.

“I plan on being very involved in the military, but I also want to be close to my family, run this non-profit organization, and work a civilian job, too.”

Rather than pursuing a corporate career, 2LT Abell is going to be working as a financial advisor to help people with their finances so they have “a better quality of life.” He’s planning to pursue a master’s degree and eventually work in the government so his work can have a positive impact on the lives of others.

“There’s got to be some kind of purpose and meaning behind it or I don’t feel like I’m fulfilling myself.”

If you’re between 17 and 35 years old, you, too, can join the Army National Guard, and you don’t have to join ROTC to take advantage of great benefits like money for college. With positions in more than 130 career fields including admin and relations, intelligence, and aviation, you can find your perfect fit. Check out the job board for more information on available careers, and contact a local recruiter to learn more.