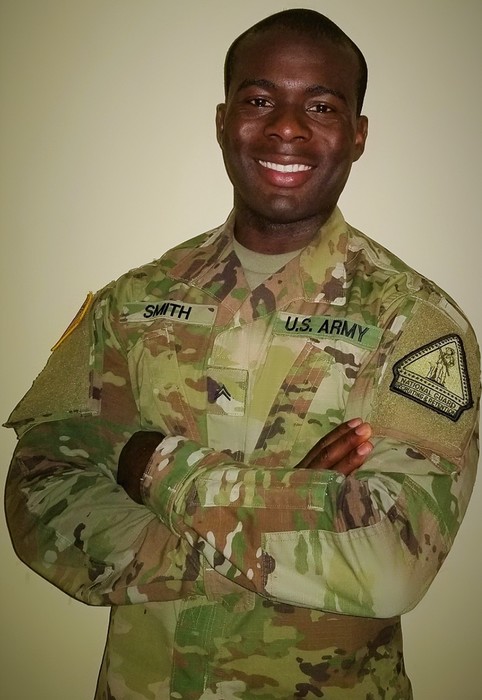 As a boy, Othello Smith fled Liberia with his father and some family members – on foot – to escape civil war in 1996. They took refuge in Sierra Leone, only to have civil war break out there, too, forcing the family to flee yet again – this time to Guinea.

Fortunately, Smith and his family were granted asylum as war refugees in the U.S. and settled in Rhode Island in 1998. He still hasn’t seen his mother, who’s in Liberia, since 1994. They’re hoping to connect with each other via Facebook when the technology becomes available to her.

Smith has seen what it’s like to live in a country with too much freedom – as in freedom to do anything you want without repercussions. In his experience in Liberia, “freedom is handing a gun to a 14-year-old kid, and he can do whatever he wants with that weapon. A young kid could see his uncle die in front of him because that is the freedom that is afforded in that county. There was nothing there to prevent that civil war.”

Smith is grateful that his new homeland has protections in place to prevent the kind of chaos he’s lived through, but still, freedom comes with a price that some Americans take for granted.

That’s one of the reasons he joined the Rhode Island Army National Guard three years ago at age 28. The Guard also offered Specialist (SPC) Smith an expedited path to citizenship and education benefits to help him earn a degree in nursing and perhaps, later, pharmacy. As a first-generation American, he wants to set a good example for his two children that anything can be accomplished through hard work.

SPC Smith thought about going Active Duty but, “the National Guard just seemed to be the best fit, as far as accomplishing your goals, and still staying in the State, serving your country, and making a difference at the same time.”

His decision to join the military was met with some resistance from his father.

“Because of so many traumatizing things that we witnessed – I literally lived through two civil wars – my father, at the time, was totally against any military activity. I decided if I were ever to bear arms and get deployed, I will change the way soldiers behave toward citizens.”

Of all Military Occupational Specialties (MOSs), SPC Smith chose one of the loudest – 13B Cannon Crewmember – a choice that could have easily triggered bad memories from his youth. During one of his first Fourths of July in Rhode Island, he remembers that fireworks sent him under his bed, where his family found him screaming and crying.

SPC Smith says he got used to loud noises on his own and through his faith in God.

He was determined to be trained in “one of the hardest MOSs the military has to offer. I like to get my hands dirty and roll up my sleeves,” he says.

Over the last year, he has transitioned to recruiting for the Rhode Island Guard. One of his goals is to expose fellow Liberian immigrants – his State has one of the largest Liberian populations in the U.S. – to military life.

“There’s more to being in America than just being an employee. You have to be a difference-maker.”

To SPC Smith, “what the Guard stands for is making a change in people’s lives.” He has found both mentors and a family in the Guard.

“The military has wrapped its arms around me and showed me that there are people out there who are willing to help you in your career, help you with a family situation, and give you advice.”

When some of his recruits come in unsure of their physical capabilities, SPC Smith tells them, “an old guy like me went to basic training and did it, and you will be able to do it. You’re not there by yourself. They are people with you every step of the way.”

SPC Smith says he often gets a text or an email from his recruits thanking him for his support.

“The relationship that I build with my recruits is very important to me,” he says. “Changing lives, that’s the most important mission I’ve accomplished so far in the military.”