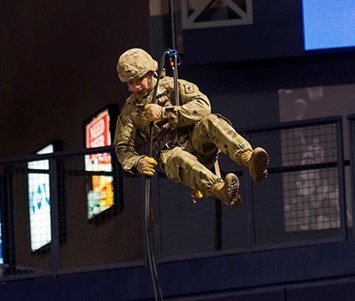 One of the things that sets the Army National Guard apart from other branches of the military is that Soldiers serve on a part-time basis.

For Specialist (SPC) Kristopher Nordby of the Rhode Island Army National Guard, this level of flexibility is giving the 22-year-old the opportunity to try different things, travel overseas, and go to as many Army schools as he can.

SPC Nordby joined the Guard five years ago as a junior in high school under the Guard’s split training option. Inspired partly by an older brother’s adventures as an Infantryman for the Guard, he enlisted with the Massachusetts Army National Guard as a 12B Combat Engineer. That was until he found out his home state of Rhode Island had an Airborne Infantry Unit, one of only a handful that exists within the Guard.

“Jumping out of planes and shooting the different weapons that the military has available kind of sparked my interest a little more,” he says of his choice to switch military occupational specialties (MOS) to 11B Infantryman and do an interstate transfer to Rhode Island, a move he believes might not have been as easy had he joined an active duty branch of the military.

While the regular infantry is on foot with rucksacks or using ground vehicles to arrive at a training ground or the battlefield, the airborne unit parachutes to their destinations from Black Hawk or Chinook helicopters, or C-130 planes, says SPC Nordby.

One of the things that drew SPC Nordby to the Army National Guard was the number of military schools he’d be able to attend without having to enlist for full-time, active duty Army service.

“Any schools they want to send me to, I’m willing to go to because that’s what I’m into.”

So far, he’s been to six military courses in his career. The most rewarding for him was the three different trainings at Army Mountain Warfare School in Jericho, Vt.

“I really didn’t know I was into rock climbing or mountaineering until I went to those schools.”

The mountains left him wanting more, so he’s considering becoming a certified mountain guide as a civilian career and pay for it by using the Guard’s education benefits.

With deployments having slowed down, especially for infantry units, SPC Nordby is taking advantage of opportunities to better himself as a Soldier until a call to serve his country comes.

“In the meantime, I’ll just go to all of these schools and learn as much as I can military-wise. Hopefully, it will help me out once I am able to deploy.”

Another option SPC Nordby is considering later in his career is trying out for one of the Special Forces units that Rhode Island also has within the state.

But for now, he’s got a full-time Guard job on a mobile event team that sets up recruiting booths and activities at high schools and events in Rhode Island, which is also flexible enough to allow him to attend military schools and train overseas.

Just recently, his unit has been attached to the U.S. Army’s 173rd Airborne Brigade Combat Team, based in Vincenza, Italy, which has allowed him to travel to the Netherlands, Germany, Poland, and Romania for trainings and parachute competitions.

“I’ve been able to travel all over the place, and it’s been amazing.”

Another thing he likes about his job is the camaraderie he’s found in the Guard.

“The friendships that you build within the unit, they’re incredible. I’ve never experienced anything like it. I can rely on anybody in my unit to help me if I ever needed it.”

So, if you’re looking for a part-time job where you can build long-lasting bonds and go on adventures, consider joining the Army National Guard.

Even if you’re not sure what career you want to jump into, the Guard offers more than 150 different jobs ranging from infantry to engineering to field artillery, and much more. You can explore all of these careers on our job board, or contact your local recruiter, who can help you find a good fit.