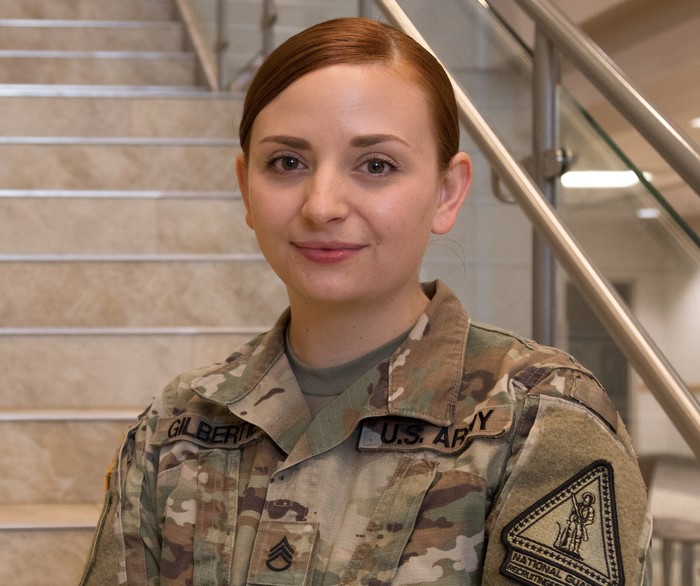 When Staff Sergeant (SSG) Stephanie Gilbertie speaks enthusiastically about her service in the Army National Guard, it’s more than just sharing her passion for her service – it’s her job.

For the last five years, she has not only been serving in the Guard, but she has also been working full-time as the Marketing Non-Commissioned Officer for Recruitment and Retention in her home State of Connecticut.

It’s a career path she could not have imagined as a young student. She had some friends who joined the military right out of high school. Although it wasn’t something she imagined herself doing, it made her think.

“I’ve always been competitive, thinking if a man can do it, I can do it,” she says. She worried that if she didn’t try to join the military, she might regret it later.

“Choosing the Army National Guard seemed like the best way,” she says. “You can have the honor of serving in the military, but you don’t have to sacrifice everything.”

“I wanted a change, to do something different. I didn’t even realize the benefits of serving in the Guard,” she says. At the time, her MOS, 31B Military Police, dovetailed nicely with her college criminal justice studies.

In 2012-2013, she was deployed to Afghanistan for about 10 months with her Unit, the 143rd Military Police. While there, her duties included driving, base security, as well as helping to train the Afghan Uniformed Police.  She enjoyed the sense of control and knowing that she had influence over the safety of the base and Soldiers.

That deployment was a turning point in her life. It helped her to realize that she didn’t want to waste time, and further inspired her to pursue her passion. Knowing she could utilize the education benefits she earned from her service in the Army National Guard, she decided to switch her educational focus to fine arts.

“Interestingly enough,” she says. “My changing to an art degree is responsible for getting me started in recruiting.”

She started out as a social media manager, then applied for what she considered to be her dream job with the National Guard.

“My art skills gave me a competitive edge,” she says. “Now I have my dream job, working for the military, and working in recruitment – influencing other people and helping them to get on the path that’s right for them.”

SSG Gilbertie says she was driven toward recruitment after she joined the Guard because she herself had such a great experience.

“I love the stability of serving, knowing you will always have an extended family, job security, great insurance, and so much more,” she says. She even met her husband and some of her best friends through the National Guard.

Another aspect she appreciates about her service and work in the Guard is that it helps her to continuously grow as a leader.

“Everything I have accomplished is attributable to one decision I made 11 years ago,” she says. That includes working in her ideal career.

“It really is my dream job – doing things as an artist while helping other young people on their career paths.”