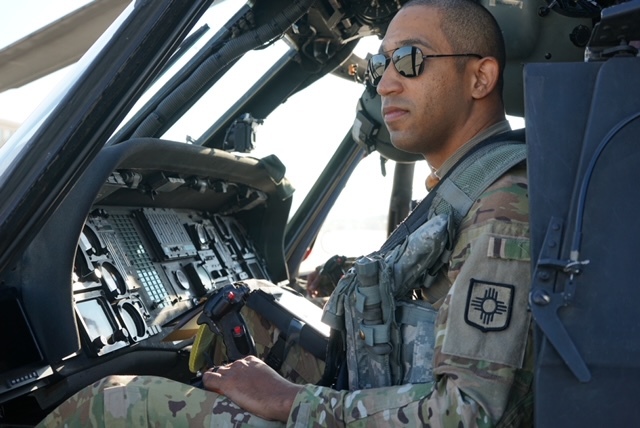 A Black Hawk helicopter pilot with the New Mexico Army National Guard, he served in the Army Reserves for 10 years before joining the Guard in 2016 to pursue his interest in aviation.

“I wanted to fly helicopters, and it is really an intense process to become an aviator,” he explains. Training can take up to two years to learn everything about the aircraft.

His interest in becoming a pilot was piqued when he was picked up to do police work aboard a helicopter while working as a deputy sheriff.

Driven by his desire to serve and help others, CW2 Anderson joined the Army Reserves right after graduating from high school on the delayed entry program, which enabled him to attend college, then go to basic training, and then to return to finish his college education while drilling.

He attended the University of Wisconsin-Eau Claire and completed his studies in criminal justice administration at Columbia College in Missouri. After graduation, he worked full-time as a police officer.

“I had a sense of wanting to serve,” he says. “I like helping people any way I can. Knowing I can help others keeps me motivated.”

Eventually, his law enforcement career led him to work as a deputy sheriff while he continued to serve in the Army Reserves. During that time, he was picked up by an Air Unit – he was aboard to conduct police work while a pilot flew the helicopter.

“I realized that being in the air is one of the most amazing things,” he says.

As it happened, one of the pilots he flew with happened to be a former Army National Guard Aviator. When CW2 Anderson shared that he was interested in changing his MOS with the Army Reserves to pursue aviation, the pilot asked if he would be interested in joining the Guard for flight training. It was an option that CW2 Anderson didn’t even realize was available.

He was directed to the New Mexico Army National Guard recruiter, who explained the path to aviation training. He applied and was accepted into the Guard’s flight training program at the U.S. Army Aviation Center of Excellence in Fort Rucker, Alabama.

When applying to the program, future aviators are pre-selected for the aircraft on which they will train, so he knew right away that he would be training to fly the Black Hawk. The Black Hawk is the military’s most versatile helicopter and is utilized for a wide variety of missions, from command and control, to air assaults, lift operations, and medical evacuations.

CW2 Anderson now works full-time for the Guard and is assigned to a Medevac Air Transport Unit. He explains that, because of the mountainous terrain of his State, there are often times when someone may get lost or have a medical emergency in an area that can’t be reached by ambulance. In such a case, his Unit is called in to prepare the aircraft and send out on a rescue mission.

He shared an experience he had a little more than a year ago as a crew member on a rescue mission in the Santa Fe Mountains to help someone who was having a medical emergency. They had to use night vision equipment to find the person, eventually spotting their campfire, and air lifted them to the University of New Mexico Hospital.

“It was one of the most rewarding experiences I have had, because it saved someone’s life,” he says.

He credits the Guard with the opportunity to pursue his interest and continue to help others.

“Flying is a skill set I wouldn’t have been able to get otherwise,” he says. “Now I have a real-life day-to-day mission and can continue serving and doing my job.”