Guard Soldier Breaks the Mold and Does It All 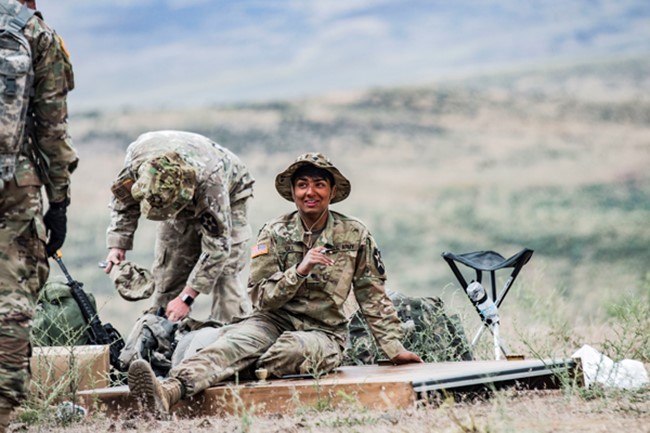 SPC Arshia Gill prepares a door for a breaching exercise on a demolitions range at the Yakima Training Center during her unit’s annual training. (Photo by SGT David Carnahan.)

CAMP MURRAY, Wash. – Specialist (SPC) Arshia Gill is breaking the mold and has become one of the many new female Soldiers stepping into combat military occupational specialties (MOSs).

But, for SPC Gill, she’s become more than just a trailblazer – she’s an engineer, a student, and a Soldier all wrapped into one. SPC Gill is a 12B Combat Engineer with Alpha Company, 898 Brigade Engineer Battalion, 81st Stryker Brigade Combat Team in the Washington Army National Guard.

“If a I had an opportunity to do this all over again, even though it's very difficult managing it, I definitely would; it’s a cool experience,” says SPC Gill.

“She’s always the first one wanting to learn and go do something,” added Sergeant (SGT) Jason Longmire with Alpha Company, 898 Brigade Engineer Battalion, 81st Stryker Brigade Combat Team. “We were doing urban breaching [training] yesterday and she was right there, right next to the door, maybe five or 10 feet away holding the blast blanket so that no one got hurt.”

SPC Gill’s company commander, Captain (CPT) Brandon Buehler, describes her as a warrior and a true combat engineer. Combat engineers are expected to be able to build structures, operate explosives, and do the appropriate mathematics to ensure that both are done correctly.

When she’s not at drill, SPC Gill is a full-time student at the University of Puget Sound. The two lifestyles are night and day. Her school’s trim and manicured campus is a world away from the hot and dusty field at the Yakima Training Center. Transitioning back and forth can be challenging.

“If I have a weekend off, I usually visit home and my family,” SPC Gill says. “That usually puts me back on my feet if I’m having a tough time.”

Family is a big motivator for her.

“Most of the men in my family have served in different armies around the world, and I am the first in my generation, and also the first female [Soldier] in my family.”

In January 2016, the Department of Defense opened all military occupational specialties to women.

“I was a little scared after basic because drill sergeants try to freak you out about being one of the first women in a combat MOS that just opened up,” SPC Gill says. “[I heard] a lot about being able to carry your own weight, and I pride myself in being able to do that.”

SPC Gill was nervous about arriving in her first unit, but that concern went away when she got to know her new teammates.

“I honestly feel blessed to be in this unit,” she says. “I'm just really happy that I got placed with some of the men that are in this unit because they’re very respectful, and the transition was very easy. I didn’t feel like there were any bumps in the road or anything like that.”

So if you’re looking to join a team that has your back no matter what, consider joining the Army National Guard. You’ll serve part-time and close to home, which will allow you, like SPC Gill, to focus on other things, too, like going to college or working in a civilian career.

Besides flexibility, the Guard also offers fantastic education benefits and training in jobs that range from engineering to infantry to intelligence and more. See our job board to learn more, and contact your local recruiter for details.

From an original story by SPC Alec Dionne, 122nd Public Affairs Operations Center, which appeared in the news section of NationalGuard.mil in July.