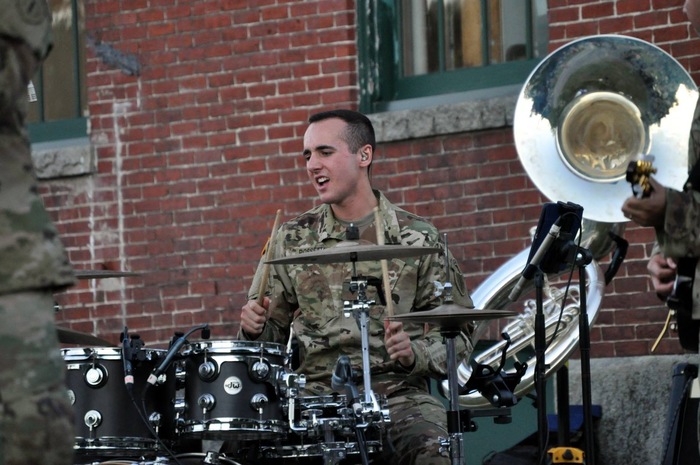 As a kid, Sergeant (SGT) Nicholas Rossetti loved music. He always listened to it with his family, and once his sister picked up an instrument, he knew he wanted to play one too.

In third grade, he received his first drum set and learned to play by listening to music, drumming along whether it sounded good or not, and taking lessons. By the end of elementary school, he had a good grasp of the fundamentals and continued playing in bands throughout middle and high school as a percussionist.

Not only was he passionate about music, but he had always wanted to be in the military. In high school he wanted to do Junior ROTC, but his music career took center stage. It wasn’t until one day during his junior year that the two worlds collided, when an active duty Navy rock band played a concert at his school.

“I was blown away,” he recalls.

This was the moment he realized that he could combine his love of music with his love of the military, but as he reached his senior year, he started thinking about college and careers. He didn’t believe it was possible to make a living off of being a musician, and after graduating, life took him in a different direction.

SGT Rossetti ignored the advice, and after a year of business school, he realized he missed being in a band.

One day as he was walking to class, he saw an Army National Guard recruiter tent on campus, with a sign that read: “Play Music in the Military with the National Guard!”

Once he learned that he could be in a band again, serve part-time in the military, continue his education, and stay home with his family, he enlisted.

“It was just the best of every single aspect I wanted,” he recalls.

As he became acclimated to his new lifestyle, he fell in love with Army culture.

“I joined to play music, and now I love more about the Army than just music,” he boasts. “It’s opened up a whole new slew of opportunities, experiences, and passions that I love.”

In 2018, SGT Rossetti competed in the Best Warrior Competition and won at the State level. He attended regionals in New York, and while he didn’t take the title, he got the opportunity to attend Air Assault school, a physically demanding 10-day training course with a reputation for being one of the tougher military programs to complete.

He felt like the underdog of his class, training alongside a handful of rough and tough infantrymen, with one goal in mind – to prove that a bandsman was just as capable as any other Soldier.

“That’s all I’ve wanted to do since getting here, is just crush that typical band reputation. We’re just as capable, just as strong, and just as smart as everyone else.”

To his surprise, he received his wings as an honor grad at the top of his class.

Back home, SGT Rossetti gets to live out his dream as a 42R Army Bandperson in the 39th Army Band of New Hampshire. Throughout the year, the band tours the State and plays a variety of events including holiday concerts, a summer concert series, and school concerts, to name a few. This past 4th of July, the 39th played a concert for the public in Dover, N.H., before a ceremonial fireworks display.

For the rest of the summer, the band will continue playing shows at parks, town halls, and other local venues.

SGT Rossetti’s been given endless experiences and opportunities in the Guard and wouldn’t trade them for anything. He’s traveled abroad to the Bahamas and El Salvador, he’s made lifelong friends, and he gets to make an impact on others. He has an immense amount of pride in what he does.

“There’s nothing more fulfilling than putting that uniform on, being in the National Guard, and knowing you have a whole entire family of Guardsmen by your side.”

Camaraderie was always something SGT Rossetti cherished when he played music as a teenager, but once he joined the New Hampshire Army National Guard, he found an everlasting family of Soldiers who would do anything for each other.

“It’s really just the best of both worlds. If you enjoy camaraderie of bands, playing with incredible musicians, playing gigs – it’s a no brainer joining the Army National Guard.”

If you’re looking for a way to pursue your passions, explore all that the Army National Guard has to offer. Whether you’re into aviation, engineering, or cyber, to name a few, there’s something for everyone. Not only will you be able to live out your dreams, but you’ll get access to benefits like tuition assistance, insurance benefits, and more. Browse current openings on the job board today, and contact a recruiter for more information on how you can serve.