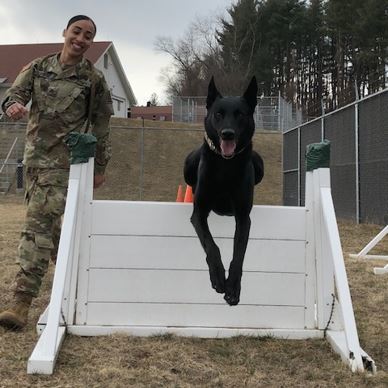 SGT Giovanna Donofrio watches as Schurkje hurdles over an obstacle in the obedience course at the Newton Military Working Dog Kennels in Connecticut.

They say, “do what you love, and you’ll never work a day in your life.”

For Sergeant (SGT) Giovanna Donofrio, this statement holds true as she moves into the sixth year of her military career. She’s turned her passion into purpose, and found a job that she truly loves waking up for in the morning.

At age 20, SGT Donofrio was attending school, but lacked the feeling that she was making an impact. With the desire to do something different with her life, she decided to join the military.

Upon leaving active duty six years later, she knew she wanted to continue her service. She transitioned to the Connecticut Army National Guard, so she could serve close to home and work in the Military Occupational Specialty (MOS) she wanted.

“When I was getting out of active duty, I [kind of] didn’t want to because I was going to miss it so much. But now that I’m in the National Guard, I’m still able to do everything I love.”

SGT Donofrio started her military career as a 91B Light-Wheel Vehicle Mechanic, and two years later, reclassed as a 31K Military Working Dog Handler — an MOS she felt passionate about.

Connecticut, home to the only National Guard kennel in the U.S., is the perfect fit for SGT Donofrio. She gets to do what she loves by working with dogs, and she’s a wife and mother of three children, so being able to spend time with her family is a priority. Serving in the Army National Guard gives her the flexibility to do both.

“It’s been very beneficial for me. I love what I do, and I love being able to wear the uniform,” she says. “I love my job and being able to go home every day and see my family.”

“You’re assigned a military working dog, and depending on what kind of dog it is, whether it’s a drug dog or explosive dog, you train with this dog, and you become a team,” she explains. “Then you go out on missions to either find explosives or drugs.”

To become a dog handler, Guard members must attend Military Police training at Fort Leonard Wood for seven weeks, followed by K9 training at Lackland Airforce Base for 11 weeks, where they learn how to handle a dog. Once complete, they’re assigned a military working dog, and go through a certification process before being able to deploy. SGT Donofrio and Schurkje are currently working toward their certification.

To get certified, Soldiers and their K9s must go through 3 to 5 days of what’s called a Detection Lane – an exercise that tests a dog’s ability to sniff out a hidden training aid, either narcotics or explosives, depending on the type of dog. The handler watches for any change in behavior, indicating the dog has detected the items.

Then they have patrol, which includes controlled aggression, a scout, and a building search, followed by obedience training in an obstacle course, and an exercise featuring gunfire to ensure the K9 won’t act aggressively or shy away if it comes under fire.

“As far as Schurkje goes, he is great with gunfire, and just sits there next to me perfectly fine,” boasts SGT Donofrio.

Even though they can’t run missions just yet, SGT Donofrio and Schurkje are given opportunities elsewhere. This past March, in honor of K9 Veteran’s Day, the pair, alongside other members of the Connecticut Army National Guard’s 928th Military Working Dog Detachment, were presented with an official citation from the General Assembly at the State Capitol, recognizing them for their service. This, she says, has been one of her most fulfilling moments in the Guard thus far.

Not only does she love her job, but she also enjoys all the benefits the Guard has to offer. With the Guard’s tuition assistance, she attends school full time, working toward her bachelor’s degree in accounting, and recently, she was able to purchase a new home using the VA loan benefit.

When she’s off the clock, SGT Donofrio enjoys hanging out with her Pomsky (half Pomeranian/half Husky), spending time with her family, painting, going to Zumba, horseback riding, and coaching cheerleading.

The Army National Guard offers the flexibility you need to live a well-balanced life. With more than 130 career options in fields like military police, medicine, and infantry, you, too, can find a job that you love, with benefits that help support you, your lifestyle, and your family. Contact a local recruiter to learn more today.