Guard Soldier’s Service Inspired by Dad, Destiny, and Girl in a Grocery Store 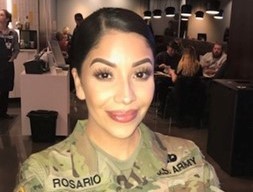 Not long after immigrating to Indiana from her native Honduras, a young Arely Elrod encountered a “beautiful girl in a uniform” at a grocery store.

It wasn’t a military dress uniform, just your everyday fatigues, but the pre-teen was transfixed. She hadn’t realized that girls could be Soldiers.

Initially, Arely’s mother dismissed her daughter’s interest in the military as a phase. No – her daughter was destined to be an attorney, a doctor, or an engineer. But Arely felt a stronger pull toward a career in discipline that never really let go.

“When I put that uniform on I feel alive. I feel like I belong somewhere.”

That somewhere can be elbow deep in an engine compartment – she’s a 91L Construction Vehicle Repairer – or singing in front of a crowd of thousands as part of the Indiana National Guard’s ceremonial unit.

Before joining the Guard, CPL Elrod had enlisted in the Army in 2008 after trying to make it in L.A. in modeling, acting, and music.

Working as a mechanic on heavy machinery like bulldozers was both an unexpected choice for the 5-foot-1, self-described “girly” Soldier, and far outside her comfort zone.

“The only thing I had done to a car before was drive it, and I barely knew how to put gas in it.”

After a tour in Afghanistan, where she lost some friends, CPL Elrod came back to the States, got the therapy she needed to deal with her combat experiences, got married, moved to Florida, left the Army, and had a son.

When her marriage ended, she moved back to Indiana to go to law school but found out it wasn’t for her. Plus, she missed the camaraderie of being in the military.

“It’s the day I decided to take my life into my own hands and into my destiny,” she says. “I wanted to remind myself how strong I was. I picked up what I remembered and joined the National Guard. It has been the ride of a lifetime.”

CPL Elrod takes satisfaction in knowing that her mechanical expertise keeps her fellow Soldiers safe, but what she really loves is performing in the ceremonial unit. She has sung at events ranging from retirement ceremonies for 30 people to sporting events like the Indianapolis 500, and Indianapolis Colts and Indians games.

The flexibility of serving part-time with the Guard also gives her time to pursue other interests. CPL Elrod and her husband recently started a maintenance, cleaning, and landscaping business, and on the side, she does makeup and microblading.

CPL Elrod says she felt destined to do something in a field that involves discipline and to be of service, traits instilled in her by her father who had passed away before the family left Honduras.

“My biological father was so loving, so selfless. He did more for others than he did for himself.”

Besides volunteering in Indianapolis to impress upon her son how blessed their family is, she wants to serve her community in a new way by becoming a police officer.

She’ll find out in December if she’s accepted by the academy.

“Because of the skills I’ve learned in the military, I’ve passed everything with flying colors – my physical, my written exams, and my oral exams.”

If it doesn’t work out, she wouldn’t mind exploring a medical career instead and moving up the ranks in the Guard.

“I’m always looking for things I can do,” she says.

So, if you’re looking to leave your comfort zone behind and serve something bigger than yourself, consider joining the Army National Guard, which offers great education benefits and careers in fields like engineering, aviation, armor and field artillery, and transportation. Contact your local recruiter for more information.