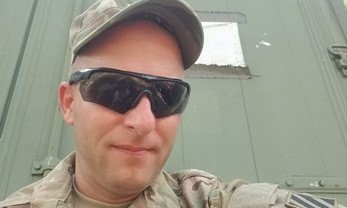 Specialist (SPC) John Ring doesn’t personally know any fellow service members who’ve died by suicide, but, “I didn’t need to know them. Just the fact that they served our country – that’s a brother or a sister.”

The Georgia Army National Guard Soldier holds veterans’ issues near and dear to his heart. A member of a Veterans’ Military Caucus in Georgia, he’s walking across the country to raise awareness and money for his fellow Soldiers. The funds he raises will benefit Buddy Watch Inc., a non-profit that plans to build a counseling center surrounded by tiny homes for homeless veterans close to Ft. Stewart, Ga.

With a 55-pound rucksack on his back, SPC Ring stepped off Georgia’s Tybee Island Pier on Oct. 1 to embark on a 2,462-mile walk across the nation, which will end at the Santa Monica Pier in California.

The mission is called “Buddy Watch Walk Pier to Pier,” and besides referencing the beginning and ending points of this journey, the name carries another significance.

“The words aren’t spelled the same,” he said, but, one way or another, “peer to peer, we’re all the same, we’re all in this struggle.”

The struggles SPC Ring is referring to are veteran addiction, military sexual trauma, PTSD, homelessness, and suicide. First-hand, SPC Ring, 40, knows what it’s like to battle on and off with a cocaine addiction that he has only recently opened up to family and close friends about. One of the things that has helped him overcome his struggle was planning his trek.

“It’s helped steer my mind to be more focused on helping people,” he said.

If he needed additional motivation, he got it in September when the U.S. Department of Veterans Affairs reported that between 2008 to 2017, more than 6,000 veterans died by suicide each year. That’s 22 veterans a day.

“It really woke me up,” he said. Still, “Talking about veteran suicide is important, but I think we need to spend more time talking about what is leading our veterans to commit suicide rather than the end
result.”

When On Your Guard caught up with SPC Ring he was on day 16 and about 175 miles into his journey.

“The support I’m getting is phenomenal. I have not slept in the woods yet,” he said, referring to the offers he’s gotten for lodging, a meal or a simple thank you.

The journey isn’t just about walking, it’s also about talking to everyone he meets along the way. Stories like those from a woman who shared that her nephew, a service member, had recently killed himself, drive SPC Ring to keep going.

SPC Ring joined the Georgia Army National Guard six years ago, “right at the cutoff age” of 34, insistent on serving as an 11B Infantryman to carry on a tradition started by his grandfather and great-uncle who served in the infantry in World War II. His great-uncle, who was awarded “two or three Purple Hearts,” he said, was an airborne infantryman who was killed in action in Normandy.

Still recovering from an injury he received three years ago on his civilian job, SPC Ring was planning to leave the Guard at the end of his contract this year, but reconsidered right before he started his trek. His readiness Non-commissioned Officer drove to SPC Ring’s location so he could sign a 1-year extension of his contract on the side of the road.

So far, two of his fellow Guard Soldiers have come out to walk with SPC Ring on part of his journey. He hasn’t had a lot of alone time on the road, but when he does, he reminds himself why he’s on the mission. When he’s at his most tired, “I just start saying the Infantryman’s Creed in my head. It really does help me.”

Originally, SPC Ring had hoped to finish his walk in 80 days, but he has since decided to abandon that timeline.

There are stops to make along the way, too – a visit a VA medical center, a tour of the National Infantry Museum and Soldier Center at Fort Benning, and time set aside to get a tattoo that symbolizes each State he will pass through on his journey. That last tattoo will commemorate what he’s hoping will be a picture-perfect ending to his walk.

“I’ve always wanted to see the sun set on the Santa Monica Pier,” he said. He’s also hoping to write a book about this experience and retrace his cross-country trek by car, stopping to thank the people who’ve shared in his walk, which he’s documenting on Facebook, Twitter, Instagram, and his website.

In part, the Infantryman’s Creed reads, “In the race for victory, I am swift, determined, and courageous, armed with a fierce will to win. Never will I fail my country’s trust. Always I fight on – through the foe, to the objective, to triumph overall. If necessary, I will fight to my death.”

It takes a special person to promise to defend the American way of life at any cost. The Army National Guard has been defending each State and the nation for 382 years, making this branch of the U.S. military older than the country itself. If you want to be part of a proud legacy of serving part-time in your community during a crisis like a natural disaster, or protecting your fellow citizens overseas when your country needs you, contact a local recruiter to learn more.