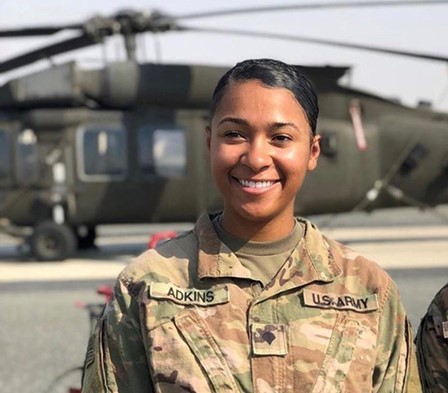 SPC Amia Adkins of the West Virginia Army National Guard, a 68E Dental Specialist, learned how to operate heavy machinery in order to deploy to Kuwait.

As a civilian, when Specialist (SPC) Amia Adkins drives, she hops into her Prius and takes off. When she drives in the West Virginia Army National Guard, she needs to strap on goggles, pull on gloves, and don a helmet before she even starts the engine.

Driving is not the only – or even the starkest – difference between civilian and Guard life for SPC Adkins. As a civilian, she’s a surgical assistant at Mountain State Oral and Facial Surgery in Charleston, W.Va. While on deployment in the Guard last year, she was a 12N Horizontal Construction Engineer, driving and operating a variety of heavy equipment.

For someone who grew up in the small town of Man, W.Va., and joined the Guard “to see everything, do everything, and learn everything,” SPC Adkins is making the most of her service experience.

She joined at age 19, after Guard representatives visited her high school. She didn’t know much about the military and had no military lineage, but she was intrigued by the opportunity to step outside her comfort zone and the chance to gain leadership skills.

“It was for the experience,” she says. “I wanted to build character, become more cultured, and meet more people.”

She now has friends from West Virginia, where she lives and is stationed – to Texas and Alabama, where she mobilized for deployment – to Kuwait, where she deployed for nine months last year.

As she began her work as a 68E Dental Specialist six years ago with the West Virginia Army National Guard’s Medical Detachment, SPC Adkins used Montgomery GI Bill® benefits to enroll at Valley College in Beckley, W.Va., to become a surgical assistant.

Her Guard journey was playing out exactly as she expected. Then, she had a chat with her Master Sergeant who told her about a unit – the 821st Engineer Company – that needed volunteers to deploy. He planted a seed that would change her Guard experience.

“My Master Sergeant said it was a good opportunity to step outside my comfort zone to learn to lead different types of people, not just people in my field, and to learn a new skill,” says SPC Adkins. “I really respect my Master Sergeant, so I took his advice and took deployment.”

She believed she would be continuing her dental work during deployment. When she arrived in Summersville, W.V., to begin mobilization, she was given instructions to go to a training site in Alabama to learn how to drive earthmovers, such as bulldozers, high excavators, dump trucks, and scrapers.

At first, she was surprised by the change of assignment.

“But then I got a little excited because I thought, ‘This is new,’ and I didn’t know anything about it,” says SPC Adkins.

In just over a month, she went from dental specialist to heavy equipment construction operator.

The 821st Engineer Company got enough volunteers to deploy. Along with SPC Adkins, there were two dental specialists, a cook, a surveyor and two MPs who stepped away from their everyday work to learn how to operate construction equipment.

“I wasn’t alone in the learning process, fortunately.”

After finishing mobilization duties in Texas, the unit met up in Kuwait where SPC Adkins and her colleagues worked on projects like building retention dams. Each day brought a new mystery in terms of the tools of her trade.

“We never got to pick our own equipment, so we never knew what we were going to get,” says SPC Adkins.

The constant change was due to environmental conditions. Some of the equipment had no cabs and, therefore, no air conditioning.

“They didn’t want to put the same person on there every day,” says SPC Adkins.

One of her most memorable experiences while deployed was the opportunity to graduate from the Basic Leader Course.

“I learned a lot about what I should and shouldn’t do as a leader. Before that course, I didn’t have a clue.”

Back to the Future

Home since January, she’s had a chance to reflect on her journey and decided to return to her original Military Occupational Specialty (MOS). She can’t help but compare her Guard experiences. And, yes, there are similar skills required for being a dental specialist and being a heavy equipment construction operator.

“Dexterity,” says SPC Adkins. “You have to be precise when you’re operating equipment, and you have to be very coordinated, so I had to use my dexterity.”

When she thinks about the future, she sees herself becoming a dental officer in the active duty Army, but for now, she’s enjoying her time in the Guard.

“I really like the camaraderie, I like wearing the uniform, I’m proud to wear the uniform,” says SPC Adkins. “When people see you out in uniform, they say, ‘Thanks for helping.’ I feel like everyone around us appreciates what we do.”

What advice would she give to somebody considering the Guard?

“Don’t rush. Explore your options,” says SPC Adkins. “I’m a living example you can change your mind and do something else. The possibilities are endless.”

If you’re up for a life-changing experience, you’ll find it in the Army National Guard, where you’ll serve part-time and receive training in one of more than 130 careers including admin and relations, intelligence, and aviation, you can find your perfect fit. Check out the job board for more information on available careers, and contact a local recruiter to learn more.