Guardsman is First Scholar in Residence at Army History Center 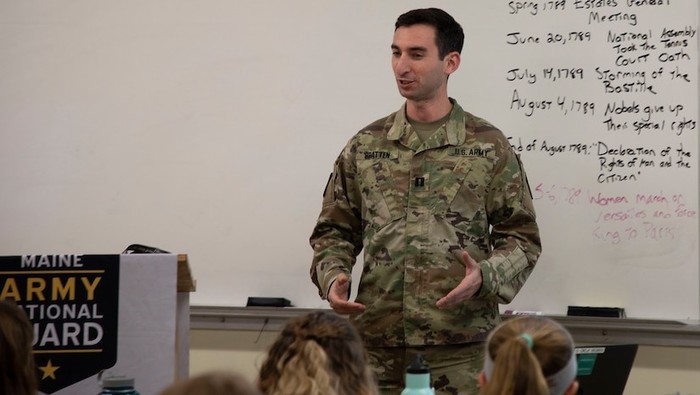 CPT Bratten, the command historian for the Maine National Guard, was recently selected to tell that story as the U.S. Army Center for Military History's first scholar in residence.

He will spend his first year as a guest faculty member at the U.S. Military Academy in West Point, New York, followed by a second year at the Army's Center of Military History, in Washington, D.C., developing educational military history tours.

CPT Bratten had to compete with active-duty, reserve, and National Guard Soldiers across the Army for the new position.

"It gives me a great sense of pride, and I think the selection also reflects well on the Maine National Guard," he says. "The Guard has presented me with incredible opportunities, and I look forward to being able to tell the Guard story in a whole new venue."

The infantryman turned engineer officer and then historian is excited to share the National Guard story.

"From the Continental Army's founding out of a collection of State organizations to the volunteer Units of the Civil War to the mass mobilizations of Guard divisions in the two World Wars, it is fundamentally important to understand the National Guard story," he says.

He is looking forward to his time at West Point because teaching is one of his passions.

"When each component understands the others a bit more, it helps us work together more effectively, especially since someday the cadets will be working alongside Guard Soldiers in combat zones," he says.

CPT Bratten serves as the full-time command historian for the Maine National Guard, in addition to commanding the Maine National Guard's 251st Engineer Company (Sapper). "We're extremely proud of CPT Bratten and this honor is well-deserved," says Major General (MG) Douglas Farnham, Maine's Adjutant General. "All aspects of our society benefit when our actions are based on a prudent and thoughtful examination of history, and the military is no exception to that. The passion that Jon brings to the study of military history is unparalleled and all of our senior leaders, and the entire organization, have benefited from his work."

During his time in the Guard, CPT Bratten has also mobilized in support of hurricane relief, deployed to Afghanistan, led a mission training team to Maine's state partner Montenegro, trained with Canadian counterparts in their Operation Strident Tracer, and represented New England in the Army's WWI centennial commemorations in France.

"He is a valued member of our National Guard family, and we know the next generation of young Army leaders will benefit from his commitment to sharing his love of history," says MG Farnham. "We wish him the very best and look forward to his return following this tour. This is a prime example of the Maine Army National Guard integrating with and supporting the active component in ways beyond just the battlefield."

From an original article by The National Guard Bureau, which appeared in the news section of nationalguard.mil on March 31, 2021.