How the Guard's N Series Launched a Career in Intelligence 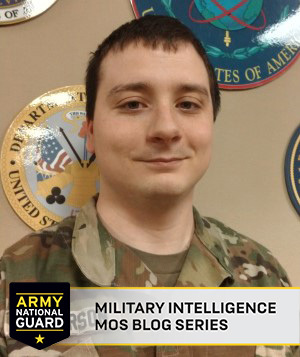 More than any other branch, the Army National Guard offers the most intelligence-related positions. Who are these men and women known as Intelligence Soldiers? Let’s find out. In the following two-part series, Mission: Possible, we talk to two of them and uncover what it’s really like to be the Guard’s biggest asset.

Growing up, SGT Benjamin Gunderson’s family didn’t have a lot of money, so he improvised when it came to his early love of computers.

He built his own.

That attitude and spirit has catapulted SGT Gunderson to the role of Signals Intelligence Analyst (35N) in the Washington Army National Guard. Intelligent from an early age, he was, however, a bit bored with the rigid confines of school. So, at 17, when most of his peers were deciding which college to attend, SGT Gunderson made a different choice. One he would not regret.

“I decided to choose the Army National Guard because I didn't really have plans for college,” he says. “I did well enough in high school, my test scores were decent, but I lacked the motivation to do a lot of my course work. I knew college would not work well for me, because I was not interested in doing the same classes over again; I wanted something unique and different.”

Due to his aptitude with computers, SGT Gunderson was initially interested in an Information Technology (IT) role within the National Guard, but because his impressive test scores gave him a plethora of options, he and his recruiter weighed each one carefully. While he had a passion for the purely technical aspects of computers, he realized more interesting doors could open for him if he focused on the data those computers can produce.

He chose an ‘N’ series position as an Intelligence Soldier, one who provides the Guard with the information it needs to act.

“It ended up being a very good fit for me,” SGT Gunderson says. “I get to sort, process and develop lots of data and my job has a wide range of opportunities.”

He says the AIT was a challenging but rewarding experience, learning all about how and why intelligence is collected on the battlefield. The most important aspect, SGT Gunderson says, was learning how to parse through thousands of data points to find pertinent information that a commander in the heat of the moment needs to know. The variety of the 35N position, as well as the perks, assured SGT Gunderson that he had made the right choice.

“I'm just as likely to be behind a computer as I am to be in the field,” he says. “I also get to have a security clearance, a very valuable asset for future employment with federal agencies and private tech companies alike.”

After completing his training, SGT Gunderson briefly worked in the private sector as an IT professional before volunteering to go to Afghanistan. His deployment lasted nearly 10 months, and he put his training to use doing a mix of tactical, strategic, and data-based work.

After returning stateside, his role within the Guard is now with the Federated Intelligence Program (FIP), an operation to provide real world intelligence support to commands. Participating in FIP allows Guard members with extensive intelligence experience like SGT Gunderson to work collaboratively with Soldiers from other Units and other States.

“Let’s say an active-duty Unit has a mission to complete,” he says. “FIP provides us with all the details we need to basically run a simulation of that mission in a controlled environment. We then pass on the information we learn from the exercise to the active-duty Unit to help them execute better. Essentially, we are an extra pair of eyes.”

Although he appreciates the ‘boots on the ground’ aspect of being a Guard Solider, SGT Gunderson is more at home collecting data and strategizing the best plan of action. He takes pride in knowing not just the ‘what’ but the ‘why’ of a mission and having a say in it. Much of that comes with the security clearance he earned as part of his job.

“The security clearance makes me very valuable as well as marketable,” he says.

Most of SGT Gunderson’s colleagues in the intelligence world are highly educated with multiple degrees. He appreciates that the Army National Guard gave him the experience to help him get a great job in the Intelligence Community without going to college. He hopes others take advantage of the path he took.

“It’s hard to get into the Intelligence Community without a degree,” he says. “So joining the Guard and getting real world experience is a great way to get a great job.”