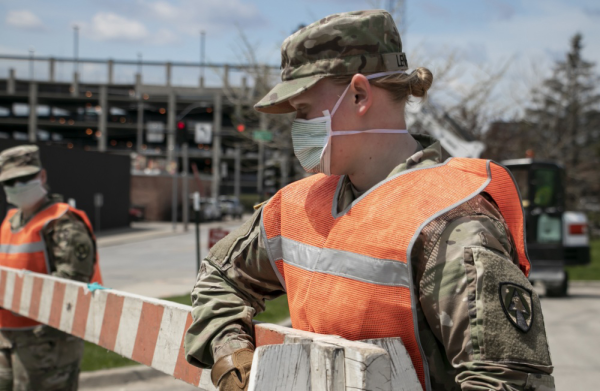 DES MOINES, Iowa – On a sunny afternoon downtown, Army National Guard Specialist (SPC) Taylor Lenhart is doing exactly what she joined the Iowa National Guard to do – helping her local community in times of crisis as a Citizen-Soldier®. SPC Lenhart is one of 60 Soldiers with the 186th Military Police Company activated to assist at Iowa’s first drive-through COVID-19 testing site.

But, up until last week, SPC Lenhart was supporting her community in another way – instructing virtual karate classes.

SPC Lenhart grew up in Ankeny, where she began taking karate classes at the age of 9. Now 22, she has earned a second-degree black belt and has been instructing students at Dojo Family Martial Arts for four years. At the beginning of the COVID-19 pandemic, SPC Lenhart and her fellow instructors knew they would have to get creative if they hoped to continue teaching their students while following social distancing guidelines.

“We had to move to Zoom (videoconference) classes, which has so far turned out really well,” SPC Lenhart says. “I help teach martial arts, but what we also teach a lot of is character skills. We help discipline kids and keep order in the house.”

Despite the distance, SPC Lenhart says all four Dojo Family Martial Arts locations in the Des Moines metro area have become one big, happy community with an average of 30 students per class. The instructors and students from different locations usually only see each other at combined belt exams, but the virtual classes have made it possible to connect with everyone more often, she says.

Now that she’s been called to State active duty, SPC Lenhart says she’s grateful for the skills 12 years of karate classes have given her – skills that go beyond kicking and blocking.

“I probably wouldn’t have joined the military if it wasn’t for the confidence karate has given me,” SPC Lenhart says. “When it comes to moving up the ranks, karate and the military are similar. When you’re an instructor, you’re in charge. You have to have the confidence to teach others what you already know. The same goes for noncommissioned officers in the Army.”

SPC Lenhart is confident in her ability to help in the fight against COVID-19, but her new mission is important on a personal level as well. When businesses began shutting down in Iowa, SPC Lenhart decided to move back home, and she says it ended up being a good decision for her family.

“I live with a high-risk person right now,” SPC Lenhart says. “My mother has muscular dystrophy and has been in a wheelchair since she was 16. I’m trying to help them get through this.”

SPC Lenhart is dedicated to supporting her family and helping her students maintain their fitness and focus through home care and virtual classes, but now she’s supporting them in a different way.

At the drive-through testing site in Des Moines, SPC Lenhart and fellow Soldiers are directing traffic and ensuring that medical personnel can do their job efficiently, all while following no-contact protocols.

“It’s really nice for us to be here and help things run more smoothly, that way people can get in and out of here fast,” SPC Lenhart says.

Above all, SPC Lenhart says she wants people to stay safe. While it can be difficult to be away from her family and students during this stressful time, she says she’s proud to help.

“I have a duty to my State and country, to the people in this community,” SPC Lenhart says. “Helping out here is also helping my students get back in the classroom faster.”

From an original article by Sergeant (SGT) Tawny Schmit, Iowa National Guard, which appeared in the news section of NationalGuard.mil on May 4, 2020.