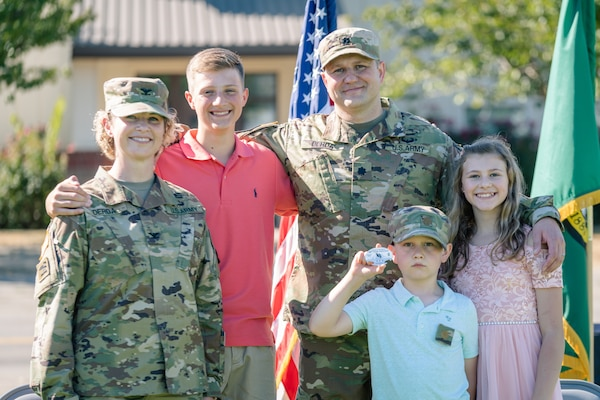 The Derda family following a joint promotion ceremony on Sept. 3, 2020, at Camp Murray, Washington. COL Kristin Derda and LTC Krystian Derda were able to celebrate their promotions on the
same day. (Photo by Peter Chang)

CAMP MURRAY, Washington – Life is full of milestones – graduating from college, getting married, the birth of a child, a promotion at work. Having the chance to celebrate these milestones with your family is so important.

For the Derda family, the latest milestone was special for everyone as Colonel (COL) Kristin Derda and Lieutenant Colonel (LTC) Krystian Derda, Soldiers in the Army National Guard, were promoted during a ceremony on Sept. 3 at Camp Murray. Both serve in the Washington National Guard.

“You will remember this day, you will tell your Soldiers, I was there the day the Derda family was promoted,” said Brigadier General (BG) Dan Dent, commanding general of the Washington Army National Guard. “These two officers have a deep commitment to our Guard, to our Soldiers, to their family and to each other.”

Enlisting in 1992 as an automated logistics specialist, COL Kristin Derda left the active duty Army in 1999 and joined the Washington Army National Guard as an ordnance officer through the Washington National Guard Officer Candidate School. In more than 20 years since commissioning, she has come up through the organization, spending time in nearly every major subordinate command, deployed to Iraq in 2004, and held multiple leadership positions at the Company, Battalion, Brigade, and State levels. She has managed the State’s Information Operations Group and currently commands the State’s Recruiting and Retention Battalion.

“Who would have thought that I would be standing here today?” said COL Kristin Derda. “Twenty-eight years ago, when I came home with a recruiter to enlist, my parents were in shock.”

With a tradition of service in his family, LTC Krystian Derda took a different path to the Washington Army National Guard, receiving his commission into the active Army in 2004 from the United States Military Academy at West Point. His first duty station would end up being his only stop. He was assigned as a platoon leader with 5th Battalion, 20th Infantry Regiment, 3rd Stryker Brigade Combat Team, Joint Base Lewis McChord, Washington.

It was during that time the couple met, began a courtship, got married, and started a family – all before LTC Krystian Derda deployed to Iraq in 2006. After spending eight years on active duty, and multiple deployments to Iraq, he transitioned to the Washington Army National Guard.

“Before coming to the Guard, I remember talking with COL Allen. At the time, I was thinking, is this a prerequisite to joining?” said LTC Krystian Derda. “I appreciate the leadership taking a chance on me and bringing me in.”

He was quickly educated on the Army National Guard’s State mission, as the lead planner for Operation Evergreen Ember, a statewide wildfire training exercise that re-established the Guard as a force that could support during the busy wildfire season. Since then, he has held multiple positions in the 96th Troop Command, 81st Brigade Combat Team, 205th Regional Training Institute and now serves as the State’s deputy personnel officer.

For the couple, though, the once-in-a-lifetime ceremony means more knowing they can do it together.

“All these years, I have never been able to synchronize our promotion, so this is a special day for us,” said LTC Krystian Derda.

See how much you can grow with the Army National Guard. With positions in more than 130 career fields, so you can serve your community in a way that’s right for you. Opportunities include supply and logistics, admin and relations, transport, and more. Check out the job board for more information on available careers, and contact a local recruiter to learn more.

From an original article by Joseph Siemandel, Washington National Guard, which appeared in the news section of NationalGuard.mil in September 2020.