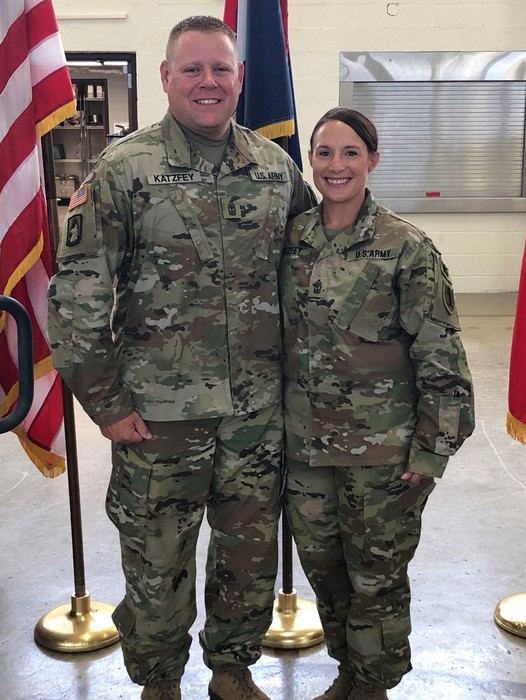 David and Trisha Katzfey are First Sergeants and full-time Soldiers who provide new meaning to the word team in the Missouri Army National Guard. (Courtesy photo)

Trisha and David have each served three overseas deployments. For them, their second deployment was unique.

“We went on a second deployment together and ended up getting engaged during the deployment,” Trisha says. “I had to come home for emergency leave, and he got to come home with me. On Christmas Eve of 2009, when we were home together, we got engaged. And it's been wonderful ever since.”

The two just celebrated their 10th anniversary. They have three kids together, ages 4, 6 and 9, and it can be a challenge to manage the household while both of them are working full-time for the National Guard. Trisha says they traditionally mobilize for different missions in October and December. “Sometimes we have to leave our kids for the needs of the Army,” she says.

Though the demands of working full-time for the National Guard present the couple with occasional challenges, the Katzfeys believe their supervisors understand their burdens and work well with them. David recently returned from a school for professional development.

“The first day I got home, she got called up to in-process Soldiers for a State emergency mission in St. Louis,” David says. “But everyone bends over backwards to help each other out during deployments and State emergency duties.”

Though Guard service has put a strain on the couple at times, they manage.

“We take advantage of every minute we're home with the kids and make the most of it,” David says. “A lot of friends and family have reached out to help with our family operations. It works out very well.”

Since both David and Trisha are senior leaders who manage several Soldiers, the two are in a unique position to help each other. Trisha has been in the Army National Guard for more than 20 years and works full time as a human resources noncommissioned officer. On drill weekends, she is the First Sergeant for the 1137th Military Police Company. David, who joined 18 years ago, is a full-time technician and First Sergeant with HHC, 140th Regional Training Institute. They bounce ideas off each other to hone their skills.

“Discussing issues helps us to make better determinations with what's going on in our individual Units,” Trisha says. “Since he is such a great operational leader, I ask him about how to respond to individual incidents. Since I am more on the administrative side with my full-time position, he is able to ask me human resources questions that he may not understand. It makes for a great team.”

They agree that their relationship makes them a stronger, more nimble team at home and more effective in their leadership roles.

The Army National Guard gives you the opportunity to pursue a civilian career while serving part time in your home State, so your family is always close by. With positions in more than 130 career fields including admin and relations, intelligence, and aviation, you can find your perfect fit. Check out the job board for more information on available careers, and contact a local recruiter to learn more.

From an original article by the Missouri National Guard, which appeared in the news section of NationalGuard.mil on Oct. 29, 2020.