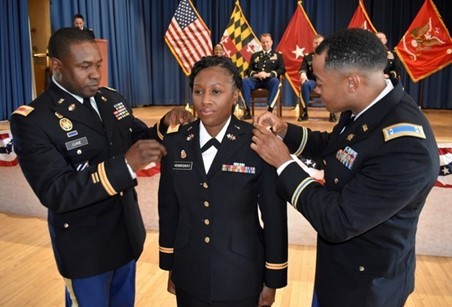 BALTIMORE, Maryland – Warrant Officers: They are the technical experts of the U.S. Army and Army National Guard. They are tasked with the invaluable responsibility of becoming subject matter experts in their career fields and serve as advisors, mentors, and trainers. Warrant Officers typically ascend from the Non-commissioned Officer (NCO) ranks within their military occupational specialties (MOSs).

However, Karinn Hemingway, a Maryland Army National Guard member, became one of the few Warrant Officers to be selected without being an NCO. Her diverse experience in the military and the civilian world allowed her to gain the necessary skills and knowledge she needed to dive into the Warrant Officer Program.

“I think it would be very different if I were on active duty,” explains WO1 Hemingway. “I don’t think I would have had the flexibility to work in the many different roles that gave me the experience to become a Warrant Officer. Being in the Guard has made it possible for me to work my full-time civilian job, attend college, obtain certifications, and still serve.”

A former Specialist in the 110th Information Operations Battalion, WO1 Hemingway has more than 10 combined years of military service as a Telecommunications Operator and Maintainer, and civilian experience in the information technology and cyber fields.

WO1 Hemingway started her military career on active duty in the U.S. Army working at the Defense Intelligence Agency in the Washington, D.C., area. After completing an initial active duty enlistment, she focused on completing both her bachelor’s and master’s degrees. During her decade-long break in service, she worked as a government contractor spending time in Iraq and Afghanistan.

Between those enlistments, her military career field had merged with another. Even with her years of experience in the military, she no longer qualified in her previous MOS. Frustrated with the situation, WO1 Hemingway began to consider alternative career paths, such as commissioning or switching to a different branch of service.

However, she realized commissioning could potentially take her out of the field she had specialized in for years. After attending a Future Formation event, a program designed to retain Soldiers near the end of their enlistment contracts, she shifted her direction. She pursued the path of becoming a Warrant Officer.

“I think that was the best decision for me because I wanted to stay in [my career field],” WO1 Hemingway explains.

It was this same decision that led her to meet Chief Warrant Officer 2 (CW2) Curtis Taylor, the Warrant Officer Strength Manager of the Maryland Army National Guard Recruiting and Retention Battalion, who guided her through the initial process.

“One of the first things [that stood out] was her poise and demeanor,” explains CW2 Taylor. “You could tell how focused and determined she was to achieve this goal. Second, you could say that she was wise beyond her rank. Which begged the question, ‘Why are you just a Specialist?’”

Her rank as a Specialist would be a unique challenge when submitting her Warrant Officer packet, as typically most Warrant Officer career fields have a minimum NCO rank requirement. Despite this hurdle, WO1 Hemingway gathered everything she needed, and went in front of a board to prove her qualifications.

At first glance, Specialists would be assumed to have minimal experience in their fields, CW2 Taylor explains. However, you often see a higher level of experience and education from junior ranking Guard members who enter the military equipped with bachelor’s and master’s degrees.

“I think the difference with active duty is you [often] have two jobs in the Guard,” explains CW2 Taylor. “You have your civilian job and then you have your [military job]. So, you’ve already shown you’re capable of managing several different tasks.”

Knowing she had the experience and skills to set herself apart, WO1 Hemingway and CW2 Taylor poured over the prerequisite requirements to be a Technical Warrant Officer within her career field. They discovered that highly experienced Specialists could be considered for selection.

While WO1 Hemingway may not have necessarily satisfied the rank requirement, she certainly had more than enough experience in her specialty. Her separation from active duty prior service and the flexibility of the National Guard both provided the space and time for her to gain the knowledge and the training she needed to be awarded her MOS qualification and satisfy the requirements to be a Warrant Officer candidate.

“Being in the Guard has allowed me the ability to work in numerous roles in my civilian career,” explains WO1 Hemingway. “All of the skills that I learned [during Advanced Individual Training] and throughout my military career were the baseline for me continuing in that role in my civilian job.”

Once her packet was approved, WO1 Hemingway shipped off to Warrant Officer Candidate School, where she learned the foundational leadership skills. Upon graduating, she had officially joined the ranks of Warrant Officers.

Her next step is to go through the Warrant Officer Basic Course to become fully qualified in her technical specialty. Until then, she will fulfill the role of mentor for any service member looking to tap into her vast knowledge and skill set.

Throughout her career, she was no stranger to mentoring many of her peers and co-workers.

“I guess they felt like I was easier to talk to than their leadership,” explains WO1 Hemingway. “I became the person they would always come and talk to.”

With her combined civilian and military experience, she will be able to share her diverse knowledge and skills with those looking for guidance into the Warrant Officer Program and beyond.

Citizen-Soldiers like WO1 Hemingway primarily serve part-time in their home States, enabling them to further their careers while staying close to home. They earn benefits to help pay for education and expenses while serving their country and their communities.

With more than 130 positions in career fields ranging from Heavy Weapons to Transportation to Intelligence, you can find your perfect fit. Check out the job board for more information on available careers, and contact a local recruiter to learn more.

From an original article by Senior Airman Sarah McClanahan, Maryland Army National Guard, which appeared in the news section of NationalGuard.mil in February 2020.