Mission of Hope: Guard Soldier Wants to Do Good for Country, Community, and Foster Youth 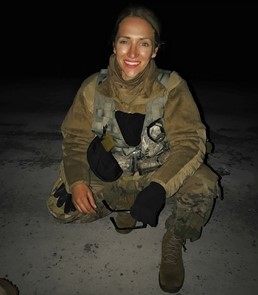 CDT Christina Meredith is in the Florida Army National Guard’s Simultaneous Membership Program (SMP), which allows college students to serve in a Guard unit and ROTC at the same time.

Christina Meredith believes that anything can be accomplished through hard work and determination.

The Florida Army National Guard Soldier, author, and non-profit founder, who is also on track to achieve her dream of becoming a military officer, isn’t wasting a single opportunity that comes her way.

“You can be offered the world, but if you don’t work, you’ll lose it, or you’ll waste it, and either one is a no-go.”

A survivor of years of abuse at the hands of her own family, CDT Meredith entered the foster care system as a teen, aging out of the system when she turned 18. While still in high school, this junior ROTC member and captain of her high school’s cross country and track and field teams became homeless, living in a car she was able to buy from working two part-time jobs.

It was in that car that she started reading the Bible and making lists of her goals. One of them was to tell her story so that other people would realize that they do not have to succumb to their circumstances. At an even younger age of 10, CDT Meredith vowed to herself after a beating by her mother that she would be nothing like the person who had just left her on the ground crying in pain.

She remembers telling herself, “You will be the antithesis of her. You will love people. You’ll be kind to people, and you will make a difference.”

CDT Meredith recognizes that her mother, too, had been a victim of abuse while she was growing up, and that abuse, without intervention, is often a cycle that can be passed from one generation to the next.

“The cycle of abuse and poverty is a real thing,” she says. “It takes a community of healthy families and organizations to wrap around broken families and children to rehabilitate them into society to the point where they’re giving back and not taking away.”

According to CDT Meredith, there are half a million U.S. children in foster care, 20,000 of whom age out of the system each year, and become homeless just like she did. Eighty percent of foster youth go into the prison system, she says, and many foster youth end up having babies themselves before they become adults.

She is hopeful that her story and her advocacy inspire people and effect change.

“My entire story is about hope, faith, hard work, achieving the dream and the purpose that you have been given in this life, and not allowing things to deter you, because circumstances change. With hard work and a little faith, you can make them change.”

And so when her dream of earning an ROTC scholarship for college didn't work out, she moved to California and eventually got “discovered” by a pageant recruiter at a Whole Foods. Crowned Miss California United States in 2013, the title gave her a platform to talk about PTSD recovery via trauma therapy and foster care reform in its entirety.

“It really birthed this new chapter in my life where I always wanted to be: to travel, to speak, to share, offer hope and encouragement, and write my book.”

CDT Meredith’s memoir, “CinderGirl: My Journey Out of the Ashes to a Life of Hope,” will be released on March 5. The title is a reflection of how her life has been transformed.

On her tour, CDT Meredith will be promoting the book and speaking on the issues that are also the focus of her non-profit organization: The Christina Meredith Foundation, based in Jacksonville, Fla. The foundation’s short-term plan is continued advocacy for foster care reform and mental health. Long-term, CDT Meredith envisions creating a facility where foster youth can live and have access to food, clothing, health care, and learn things like how to balance a checkbook, so long as they have a full-time job or are in school.

In the meantime, CDT Meredith is in school herself, working on a degree in international relations with a minor in psychology. She’s also in ROTC as part of the Guard’s Simultaneous Membership Program. When she earns her commission next December, she plans to become a 25 Signal Officer in the same unit where she currently serves, where her job is to provide secure communications for her fellow Soldiers.

“I love the structure, I love the discipline,” she says of the Guard. “I love the camaraderie. I love that I’m doing good.”

Part of that good comes from knowing she is part of a team that saved lives in her home state when Hurricane Irma swept through Florida in 2017.

CDT Meredith has yet another goal on her list, and that’s to translate her degree and Guard experience into politics. She’s planning to run for office someday.

The flexibility of serving in the Guard part-time is allowing her the time to work on all of her goals.

“I have my civilian job and still have that military experience and leadership, and I can really bring something to my country.”

With its dual mission to serve the State and the Nation, The Army National Guard is always looking for service-minded people to join its ranks. Besides the satisfaction of knowing that your service is making a difference, the Guard offers training in more than 130 different jobs in fields like military intelligence, aviation, infantry, mechanics and maintenance, and more. Contact your local recruiter to learn more.