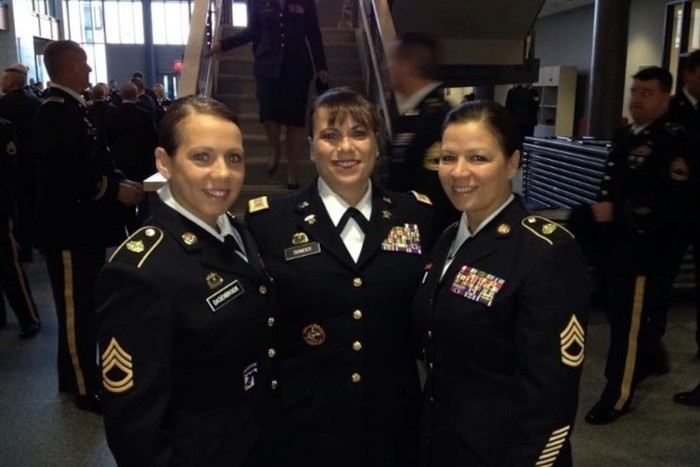 WASHINGTON – Teresa Domeier didn’t shy away from playing contact football with her older brothers while growing up in rural Nebraska. She’d get in the dirt with them, tackling her siblings and taking hits in the family’s sprawling backyard. She'd have scrapes and bruises but never backed away from a challenge.

“That kind of made me tough,” says Teresa, now a Chief Warrant Officer 5 (CW5). “I had to hold my own ground.”

She also became the first woman to become Command CWO of the Nebraska Army National Guard.

“I always had to fend for myself,” says Teresa, who has served more than 30 years in the Army’s food services. “They didn’t treat me special. If I had to go out and help put a big tent up, I was right there with everybody else.”

Teresa says her competitive edge started with physical training that helped push her to compete in fields dominated by men. Her penchant for competition can be traced to the 10-acre horse farm in the Midwest she called home.

In a stretch of prairie between Lincoln and Omaha lies Ceresco, Nebraska, a small agricultural community spread over 270 acres along Route 77. Here, Teresa lived in a four-bedroom farmhouse with nine brothers and sisters and attended the town's only public intermediate school of 500 students.

With few children her own age in the town of 1,200, she toughened herself through various athletic pursuits. Teresa learned to mount a horse by the time she could walk. She competed in basketball, volleyball, track, and softball throughout high school.

Her parents, Donald and Nora Hunt, worked long hours for Western Electric and had to commute an hour northwest to Omaha. The Hunt children worked for various farmers until their muscles ached. Bailing hay, weeding bean and milo fields, and detasseling corn. “We worked through miles and miles of beans,” says Teresa's younger sister, Mellessa Dasenbrock.

By the time Teresa graduated high school in 1982, she had earned an athletic scholarship to play volleyball and softball at a small college in Lincoln but dropped out after two months.

Teresa loved her hometown, the friendliness of the townspeople, and the country setting. But she wanted to serve the Cornhusker State in a larger capacity. After leaving college, she listened to pitches from Marine Corps and Army recruiters but didn’t like what she heard.

Instead, the unique mission of the Army National Guard enticed her. In the Guard, she would test her leadership abilities in a new capacity.

During basic combat training, she was repeatedly appointed Squad Leader by her Drill Sergeants. She coached fellow female recruits who struggled with their fitness. “[I took] charge, no matter what,” she says. “I’ve always done that. Growing up in a big family, you couldn't be shy.”

When Teresa completed basic training in 1983, she returned to Nebraska, excited by what she had learned.

Teresa later encouraged her younger sisters to join the Nebraska Army National Guard when few women enlisted. The youngest Hunt sister, Bonnie, enlisted first, followed by Mellessa. As it was during their adolescence, Teresa continued to look after her younger siblings.

Mellessa had looked up to Teresa for her boundless energy and her fearless approach to adversity. “She knew that I was very indecisive. I became a very independent person,” says Mellessa, who became a Sergeant First Class (SFC) in the Guard. “And that was partially from her.”

In her job as a member of the Army National Guard, Teresa responded to calls whenever her State needed her, helping bring relief to victims of tornados or driving through a winter blizzard.

And when her sister faced life’s toughest test, Teresa would be there.

A shoulder to lean on

It started as a nagging pain. Then, during the onset of a Nebraska winter in 2007, the ailment would upend Mellessa's life. At Lincoln's St. Elizabeth Hospital, a doctor pressed firmly into Mellessa’s abdomen. She winced instantly from the pain.

Mellessa had been battling abdominal discomfort for months. The Soldier felt a sharp sensation in her side whenever she jogged. The pain grew so unbearable, she stopped eating regularly and began to shed weight.

Doctors initially told her she was in good health. They said she had been in great physical condition and had nothing to worry about.

Unsatisfied with her primary care doctor’s assurances, she sought out a specialist.

On a cold December day, her doctor ordered some tests and a colonoscopy, sending Mellessa to the emergency room after noting her excruciating response.

The results revealed she had Stage 3 colon cancer. The cancerous tissue had spread from her abdomen through her lymph nodes. Mellessa underwent a resection procedure to remove the cancer.

The then-Staff Sergeant (SSG) had to spend Christmas Day on a liquid diet as she waited two days for medical staff to perform the emergency procedure. She drank coffee and broth while her family dined on turkey and stuffing.

Her first day of chemotherapy treatment in January 2008 jolted her. She had already endured so much. And the torment from the treatment had pushed her to her limits.

Her sister, Teresa, had driven from her house in Lincoln to support her sister during the appointment. “You're going to be fine,” Teresa recalls. “There’s no reason you can't get through this.”

Mellessa covered her face and wept. Teresa stayed with her younger sister, massaging her back, arms, and legs until she slept. “She had seen me; my state of mind and body,” Mellessa says. “It was just something I could not control at all.”

Teresa knew the only way Mellessa could recover would be through chemotherapy and regularly attending her wellness appointments. By the next morning, Mellessa had changed her mind and decided she would gather the strength to weather the treatments.

Whenever Mellessa wanted to stop chemotherapy, Teresa rushed to her side. “She was just there when nobody else was here,” Mellessa says. “She took care of me.”

Teresa had earned the nickname “Mother Teresa” when the sisters deployed together to Al Asad Air Base, Iraq, from 2005 to 2006.

Whenever a homesick troop needed someone to listen to them, they turned to “Mother Teresa.” She organized game and movie nights. When relatives sent her care packages, she’d share the contents with the young troops.

As the lead food services officer at Al Asad, Teresa helped organize the base’s largest dining facility while managing three additional dining halls. She instructed her troops to keep steady watch over meal preparation, assuring the food was sanitary and safe for consumption.

She took special care of Soldiers going outside the wire, assuring they had enough meals ready-to-eat (MREs). Mellessa said troops traveled from other bases and parts of Al Asad just to dine in the facility, which featured a wide cuisine selection.

The sisters grew closer during the deployment. At the time, Mellessa had been dealing with a turbulent marriage and longed to be home with her children.

Teresa, knowing her sister’s state of mind, kept her energized. Teresa brought her coffee each morning. The sisters slept in adjacent trailers and she’d knock on the wall to signal when she was ready to go for a run.

And once again, in the winter and spring of 2008, Teresa was at her sister’s side bringing her games and meals. Mellessa had to leave her Unit, the 623rd Engineer Company, and transfer to her sister’s Unit, the Nebraska Guard’s joint force headquarters, so she could go on convalescent leave.

Over the next nine months, Teresa adjusted her travel schedule so she could attend all her sister’s chemotherapy appointments. She kept track of her progress with texts, phone calls, and visits.

Finally, in September of that year, her doctor told her the cancer was in remission. Mellessa would go on to serve another eight years of active duty in the Guard.

The cancer never returned. Mellessa, who retired in 2016 after three decades as a Soldier, credited the support of her children, her family, and Teresa. Teresa, then a CW4, would continue to be a mentor to young Soldiers and noncommissioned officers, eventually becoming the state’s top CWO.

From Nebraska to DC

Recently, on an overcast winter afternoon in the Washington, D.C. area, Teresa reflected on the Soldiers she mentored, including a young Sergeant (SGT), Courtney Miller. Teresa met Miller while visiting her in her hometown of Sidney in the Nebraska panhandle. When she met Miller, the Sergeant could barely compose herself. “She was shaking,” Teresa says.

Teresa calmed the Soldier and took her under her wing, eventually encouraging Miller to apply for Warrant Officer School. In 2018, at an Army post in Germany, Teresa promoted her to CW3.

“She would help [Soldiers] become pretty independent,” Mellessa says. “You know it was a good thing because I see those people now these days, and they have thrived in life. They have become better people.”

As Command CWO, after Teresa learned that the difficult promotion process discouraged Warrant Officers from continuing their military careers, she changed the policy. Because of a lack of availability, Soldiers often struggled to get placed into the advanced course. Teresa made the course a requirement to be promotable to CW4 to expedite course placement.

When Teresa applied for the Command Chief position, she competed against 11 other candidates.

Being able to lead the Guard’s Warrant Officer cohort at the national level has impressed her family. “And she did it with such pride,” Mellessa says.

While she values her experience as the National Guard’s top Warrant Officer, and she fondly treasures the troops she has mentored, Teresa plans to return to the Cornhusker State.

The 1,100-mile separation has been difficult for her, and she looks forward to reuniting with her large family – her husband of 34 years, her mother, now 89 years old, and her nieces and nephews.

Teresa has 17 months left in her tour as the Guard’s Command Chief. The sisters have talked about going into a catering business when Teresa leaves the Guard.

“I told her, ‘Well, we can go into catering business,’ and she was like, ‘That'd be interesting,’” Mellessa says. “And she says, ‘That’d keep us busy.’”

The Hunt sisters wouldn’t have it any other way.