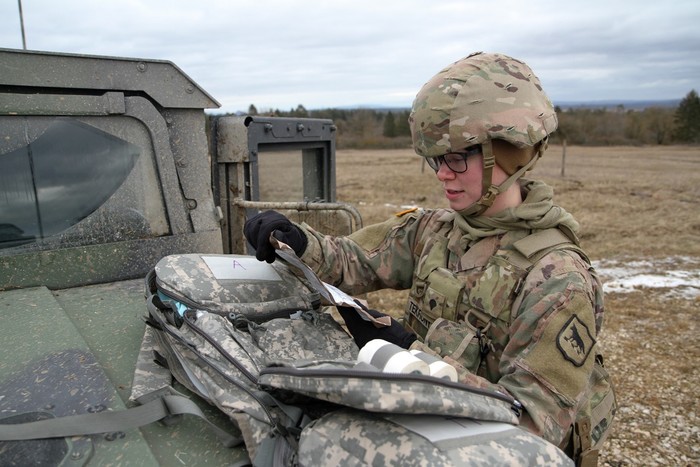 SPC TeKrony, from the small town of Estelline, S.D., is attached to the South Dakota Army National Guard’s 1-147th Field Artillery Battalion and serves as a 68W Health Care Specialist, commonly referred to as a combat medic.

She has been drawn to the medical field and the military ever since she was a child.

“It started when I was about 8 years old,” says TeKrony. “I had a huge respect for military personnel, and I had a doctor’s outfit with a stethoscope, so I would pretend to be a military medical person.”

But SPC TeKrony had her doubts about being able to join the military.

“I didn’t understand when I was younger that women could be in the military at the time,” she says. “As I got older, I realized there are things like the National Guard and how more military occupational specialties have opened up to women. There came a point when I realized, ‘I can do that.’”

After talking to a recruiter a few times, “I felt a deep calling and I knew it was what I wanted to do, especially if I could get into the medical field.”

“It’s a pretty difficult course,” she says. “It was the first time in my life where I was really recognized for doing what I felt was right. I was crazy humbled and honored.”

SPC TeKrony then found herself attached to the 1-147th Field Artillery Battalion, where she went on back-to-back deployments, one with each battery.

“I never wanted to just sit in South Dakota,” she says. “I never want to sit in just one place, that’s why these deployments have been great. I like to go places and do and see different things.”

Throughout her time as a combat medic, SPC TeKrony has learned a lot of medical procedures that most civilian nurses are not allowed to do.

“I’ve gotten to do sutures, cyst removal, toenail removal, wart excisions on feet and fingers,” she says. “It’s pretty amazing because a lot of the time on the civilian side, it is only the providers that are allowed to do such things.”

SPC TeKrony has been taking college classes while deployed to further her medical career. Soldiers earn benefits to help pay for education and expenses while serving their country and their community.

“I’ve definitely been drawn to a lot of specialties in my life,” she says. “After being here, I would definitely like to work in an ER; however, there is a part of me that would like to go to a more dangerous place to be able to take care of these things that happen daily, whether that be in the Army or on the civilian side.”

SPC TeKrony highly recommends anybody interested in entering the medical field to join the Army National Guard as a Health Care Specialist.

“It would be a great steppingstone into the medical career,” she says. “Not only are you more exposed on the military side, but you also get the experience to carry into the civilian side.”

From an original article by SPC Tyler O’Connell, 129th Mobile Public Affairs Detachment, which appeared in the news section of NationalGuard.mil on Feb. 3, 2020.