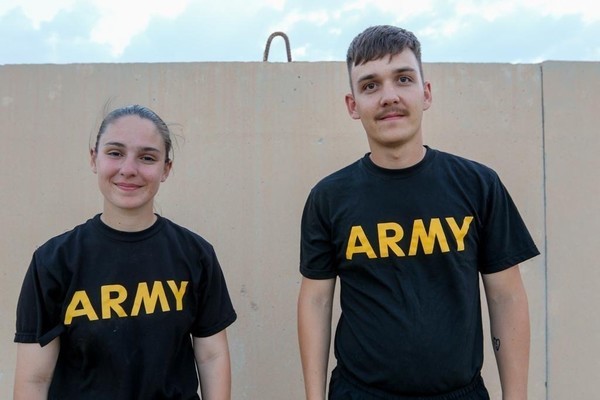 UNDISCLOSED LOCATION – April 10th is Siblings Day, recognizing the special bond between brothers and sisters. The military, including the Army National Guard, is often recognized for similar bonds, because of the special trust that develops among service members in the ranks.

“I was pretty happy to see my sister again,” says Jeremiah Herzog, an Armored Crewman in the 1-252nd Armored Regiment, 30th Armored Brigade Combat Team. “I hadn’t seen her since the Fourth of July last year. It was really exciting to see her here in the desert.”

The Herzogs joined the North Carolina National Guard together in the spring of 2018. PFC Herzog, who is two years older, says he was inspired to join after his sister enlisted as a Combat Engineer during her junior year of high school.

“I was surprised when she joined. I didn’t think she was really going to do it, so I had to one-up her and join too,” he says.

SPC Herzog, a Combat Engineer in the 236th Brigade Engineer Battalion, 30th Armored Brigade Combat Team, says basic training was a proud moment, and she is grateful for the support of her parents.

“My mom was hesitant about me joining, but my dad thought it was great. He said, ‘You’re going to get to blow stuff up,’” says SPC Herzog. “He thought it was cool.”

When she went on to complete Advanced Individual Training at Fort Leonard Wood, Missouri, her brother left for Operation Spartan Shield in the summer of 2019.

“I was happy she made it through. I was both nervous and proud of her,” says PFC Herzog.

The Herzog siblings are nicknamed “other Herzog” by their peers. PFC Herzog says the nickname started their first drill weekend together when they got teased for having the same last name.

“It was a rough first drill weekend together and our first physical training experience,” says PFC Herzog. “It was confusing for people to call us the same name.”

SPC Herzog says going through these experiences together was comforting because they supported each other. She added that it felt like they had each other to count on and that made it better.

PFC Herzog says he’s made a lot of friends while deployed, and it has been a good opportunity for him to perform his job and earn money.

“I love working on the tank and have the most fun when I’m doing tank maintenance,” says PFC Herzog.

“We blow a big hole in the door in order to breach it so we can move in or get past it,” says SPC Herzog.

The Herzog siblings say they go to dinner every night together and enjoy spending time to sit and talk. They say they are thankful for the continued support of their family and want them to know they love them very much.

When not on deployment, the Army National Guard gives you the opportunity to pursue a civilian career while serving part-time in your home State, so your family is always close by. With positions in more than 130 career fields including admin and relations, intelligence, and aviation, you can find your perfect fit. Check out the job board for more information on available careers, and contact a local recruiter to learn more.

From an original article by CPT Regina Corbin, 30th Armored Brigade Combat Team, which appeared in the news section of NationalGuard.mil in April 2020.