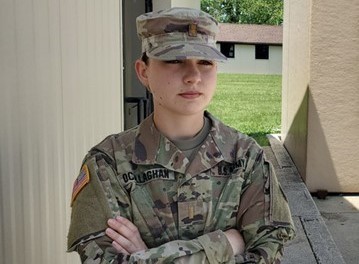 COLUMBUS, Ohio – The Ohio Army National Guard’s support during the COVID-19 pandemic has presented many firsts for the organization.

It marks the first time since the Blizzard of 1978 that the Army National Guard has responded to serve the State on such a large scale. The Guard’s overall COVID-19 response, known as Operation Steady Resolve, is the first time Ohio’s Army Guard, Air Guard, Naval Militia, and Military Reserve have been activated under one joint task force.

Among the hundreds of Soldiers, Airmen, and other personnel who have answered the call to serve on the front lines of the COVID-19 response is one who had already achieved an historic first of her own for the organization. Second Lieutenant (2LT) Colleen O’Callaghan is the first woman in the Ohio National Guard’s 232-year history to become an Army Infantry Officer.

With the integration of women into combat arms still in its infancy – the Department of Defense began allowing them to serve in direct combat Units more than five years ago – 2LT O’Callaghan took a leap of faith to start her journey toward becoming an Infantry Officer.

Graduating the Army’s Infantry Basic Officer Leaders Course (IBOLC) was an accomplishment 2LT O’Callaghan says she never envisioned when she began her career in the Ohio Army National Guard. Along with help from her recruitment team, she navigated the obstacles to pave the way for herself and other women to join the Infantry branch.

“I really wanted to take on a big challenge,” 2LT O’Callaghan says. “So, I walked into the Army National Guard recruiting office and told them I want to be an Infantry Officer. I saw it as an opportunity to reinvent myself and serve my country.”

2LT O’Callaghan earned her blue cord – a military decoration worn over the right shoulder on an Army dress uniform by all Infantry-qualified Soldiers – in October after a successful 12 weeks of IBOLC training at Fort Benning, Georgia. The installation is home to the Maneuver Center of Excellence, which also trains armor and cavalry Soldiers, as well as oversees specialty training, including the U.S. Army Ranger and Airborne schools.

After completing Officer Candidate School with a near equal number of men and women, 2LT O’Callaghan was one of only three women in her IBOLC class. Despite being the first woman in the Ohio National Guard to branch into infantry, 2LT O’Callaghan says her experience was the same as any other Soldier’s. She found her peers and cadre supportive of her decision, actively encouraging her throughout the course and treating her professionally.

“The cadre and staff there were really excited and were really understanding of the position I was in. It can be awkward being one of the only females,” says 2LT O’Callaghan. “But I ended up making some great friends and definitely had some memorable experiences.”

“This (was) an historic event for the Ohio Army National Guard to have the first female Infantry Officer complete IBOLC,” COL Woodruff says. “It means a lot for the 1-148th (1st Battalion, 148th Infantry Regiment), the 37th IBCT (the major subordinate command over the 1-148th), and the Ohio Army National Guard in paving the way for future female Soldiers, NCOs (noncommissioned officers), and officers to be in combat arms in Ohio.”

2LT O’Callaghan, of Xenia, Ohio, attended her first drill weekend in January as a platoon leader with the Ohio Army National Guard’s Company C, 1-148th, in Tiffin. Shortly thereafter, the coronavirus outbreak hit Ohio, forcing many businesses to close. It also meant a civilian job opportunity for 2LT O’Callaghan was put on hold. So, when the Ohio National Guard created a joint task force in response to Gov. Mike DeWine’s call for the Guard to provide support during the COVID-19 pandemic, it only made sense to 2LT O’Callaghan that she answer the call to volunteer.

“I had just accepted a role at a new job, but they could not start me until after the (governor’s) stay-at-home order was lifted,” 2LT O’Callaghan says. “So, I volunteered to be put on orders and help the State until I could start my new civilian role.”

2LT O’Callaghan was able to serve close to her Southwest Ohio home, at the Second Harvest Food Bank of Clark, Champaign, and Logan Counties in Springfield. As officer-in-charge of the approximately 40 military personnel staffing the food bank, she led a joint team responsible for a variety of mission sets, including drive-thru food distribution and home deliveries across Second Harvest’s rural, tri-county coverage area.

2LT O’Callaghan says her experience as a new Officer was enhanced by support from her senior NCOs. While Infantry Officers don’t typically train to run food bank operations, she was able to use her administrative expertise from previous civilian jobs while capitalizing on the variety of skills her team members had to offer. Together, they were able to efficiently operate at the food bank and serve fellow Ohioans in need.

The public’s response in Springfield has been overwhelmingly positive.

“There were a lot of people who were just very grateful there was help available,” she says. “I would stand toward the front of drive-thru distributions to greet people as they arrived; they were always very positive and thankful we were there to help them when they needed it most.”

2LT O’Callaghan says she felt gratified to serve her friends and neighbors in such a direct way. The Army National Guard is unique in that it allows Soldiers like 2LT O’Callaghan to serve in their communities, which has helped her make the place she calls home even better.

“We genuinely want to be here. We have all volunteered and we are all serving relatively close to our homes whenever possible,” she says. “Everybody wants to help because there are so many people (who are) out of work and need assistance, and we have the ability to do it.”

2LT O’Callaghan says she wants her service as both a female Infantry Officer and a member of the Ohio Army National Guard during Operation Steady Resolve to inspire others to start their own journey and, ultimately, pursue opportunities to serve their Community, State, and Nation.

“I didn’t get here on my own, and at no point was I alone,” she says. “What I hope to do is encourage other women to take on something extremely challenging and take the leap.”

The Army National Guard offers positions in more than 130 career fields, so you can serve your community in a way that’s right for you. Opportunities include supply and logistics, admin and relations, transport, and more. Check out the job board for more information on available careers, and contact a local recruiter to learn more.

From an original article by 1LT Kevin Livingston, Ohio National Guard, which appeared in the news section of NationalGuard.mil on July 21, 2020.