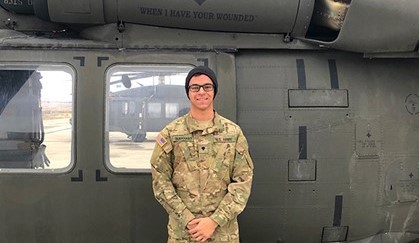 From his days as a lifeguard in high school training alongside members of an ambulance company, Mason Burkhart knew he wanted to go into the medical field. And from an even younger age, he knew he wanted to join the Army.

So now at age 23, he’s doing both. In his civilian life, he’s a ground-based paramedic for Reno, Nev.’s Regional Emergency Medical Service Authority (REMSA). In the military, he’s Specialist (SPC) Burkhart, a 68W Healthcare Specialist who serves part-time as a flight medic for the Nevada Army National Guard.

That’s on top of his enrollment as a pre-med student at the University of Nevada, where he’s working on his bachelor’s degree in microbiology using the Guard’s State education benefits to pay for his tuition and textbooks.

From there, SPC Burkhart is keeping his options open as to what he might specialize in as a physician down the road, but trauma surgery is definitely among them.

In the meantime, his aviation unit, which includes some of his REMSA co-workers, is preparing for a deployment to Afghanistan next year where it will perform medevac missions to treat and transport critically ill and injured patients.

SPC Burkhart has been in the Guard for only 18 months, but he came into it with several years of medical experience under his belt. He became an EMT at age 18, “fell in love with it” and went on to become certified as a critical care paramedic, which ties in directly with his Guard work as a flight medic.

Both of his jobs complement each other, he says.

His Guard training as a combat medic is more heavily focused on treating traumatic injuries, which has improved his assessment and treatment skills for those patients, whereas his civilian career gives him exposure to many more patients – 40-50 per week – who are experiencing medical issues of all varieties.

“It’s a really unique line of work,” he says of his civilian job. “You have to be really adaptable. From one second to the next everything can change. No two days of work are the same, and I really like that.”

That same unpredictability goes for his Guard work, too, particularly for his unit, which operates from Black Hawk helicopters, and therefore requires SPC Burkhart to know the Black Hawk’s capabilities, such as how to use a hoist to attend to a patient on the ground.

“We can get activated for anything. We can go to hurricanes, we can fight fires, we can do search and rescue. You train for what your capabilities are, but you never know what you’re going to be getting into.”

SPC Burkhart says his unit embraces DUSTOFF (Dedicated Unhesitating Support to Our Fighting Forces), as a more of a motto than just the radio call sign for a medevac helicopter.

“We’re always there in a time of need, and that’s one thing I just really love about the Guard. I love my job; I wouldn’t trade it for anything. I have the coolest job in the Army.”

Besides being there to help his fellow Soldiers when they need him, SPC Burkhart has also answered a call to serve some local veterans. Last summer he volunteered to serve as a medic for Honor Flight Nevada, which takes veterans to Washington, D.C., to visit the memorials and museums that are dedicated to their military service.

Honor FIight is an experience he’d like to share with his father some day, a former Marine turned Army National Guard Soldier and Gulf War veteran.

“He really loves the fact that I’m in the Army. It gives him someone to talk to about all the little nuances that only people who have served can understand.”

SPC Burkhart has zero regrets about his decision to serve.

“It’s a big commitment to sign your name, take that oath and dedicate yourself to something larger, but it’s definitely worth it.”

So if you’re interested in dedicating yourself to serving others, the Army National Guard has a unique dual mission of serving the State and the Nation.

The Guard offers Soldiers training in one of more than 130 careers in fields like armor and field artillery, administration, transportation, and engineering. And because military service is a part-time commitment, many Soldiers also hold civilian jobs or attend college or a trade school using the Guard’s education benefits.