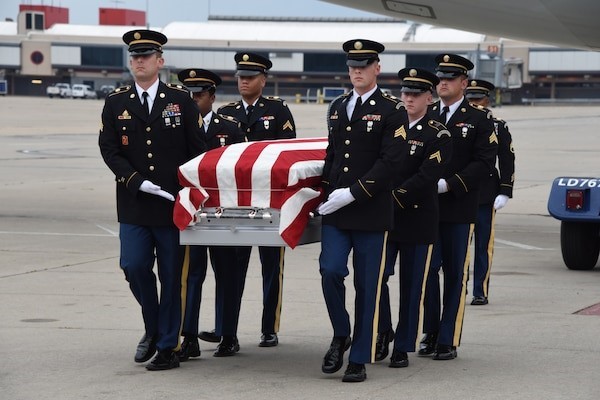 The remains of Cpl. Jackey Dale Blosser of Randolph County, West Virginia, were returned to family members during a dignified transfer of remains at Pittsburgh International Airport July 30, 2020.

This is just one of the many ways Army National Guard Soldiers serve their community and their fellow Soldiers.

“We were honored to participate in this transfer,” said Christopher Houck, Military Funeral Honors coordinator for Pennsylvania. “Any Soldier who made the ultimate sacrifice for this country deserves the utmost respect, and we were glad to be able to return Corporal Blosser’s remains to his family.”

Blosser, a member of “Dog” Company, 1st Battalion, 32nd Infantry Regiment, 7th Infantry Division, went missing in action Dec. 2, 1950, when the enemy attacked his unit near the Chosin Reservoir in North Korea. American forces did not recover his remains. Blosser was 21 years old at the time.

Following a June 2018 summit, representatives of North Korea transferred 55 boxes of remains to the Defense POW/MIA Accounting Agency in August 2018.

One of the boxes contained remains reportedly recovered by the North Korean People’s Army in the vicinity of Blosser’s last known location. Following DNA testing at Dover Air Force Base in Delaware, the remains were identified as Blosser’s.

With the Army National Guard, Soldiers serve part-time close to home. With positions in more than 130 career fields, so you can serve your community in a way that’s right for you. Opportunities include supply and logistics, admin and relations, transport, and more. Check out the job board for more information on available careers, and contact a local recruiter to learn more.

From an original article by Brad Rhen, Pennsylvania National Guard, which appeared in the news section of NationalGuard.mil in August 2020.