Recruiter Puts Soldiers in Boots, Then Yells at Them (to Prepare Them for Basic) 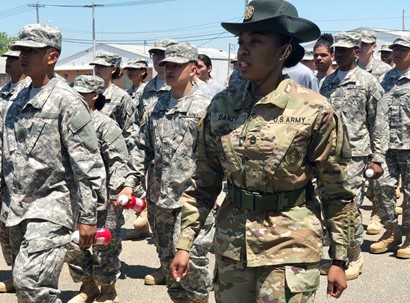 If you’re thinking about joining the Army National Guard, there’s something you should know. Your recruiter, that person who kindly answers all your questions and guides you through the enlistment process, might just also turn out to be … your drill sergeant.

As Sergeant First Class (SFC) Shereka Danzy likes to say of her recruits, “I put them in boots, and then I yell at them.”

The New Jersey Army National Guard recruiter also happens to be a drill sergeant for the State’s Recruit Sustainment Program (RSP), a mandatory program designed for Soldiers who’ve enlisted and have not yet gone to Basic Training, or Soldiers who’ve gone to Basic and have yet to go to Advanced Individual Training (AIT) for their military occupational specialty (MOS).

“We’re teaching them how to march, customs and courtesies, military knowledge, acronyms, and getting them ready for Basic Training,” says SFC Danzy. “It’s to make sure they’re Army or Soldier ready. A lot of times the Soldiers from the Guard are better equipped for Basic Training than the Soldiers that come right off the couch.”

SFC Danzy was one of those “off-the-couch” Soldiers, having enlisted in the active duty Army in April of her senior year in high school, and shipping off to Basic in August without any kind of training beforehand.

SFC Danzy joined the Guard in 2002 after her contract with the Army ended, eager to start her college education.

“The decision to leave active duty was based upon the fact that I was given all this money for school, but I had no time for it.”

Because Guard service is part-time, she was able to get a degree in law enforcement and become a parole officer for the State of New Jersey while serving as a traditional Guard Soldier, drilling once a month and attending annual training in the summer.

After becoming a cadre member in Sea Girt, she was asked to become a drill sergeant.

When she realized there was not another female drill sergeant in the ranks, SFC Danzy decided, “Ok, absolutely I must go.”

As the first woman to become a drill sergeant in the New Jersey Army National Guard, “you’re representing women, one, and that’s a big deal, then I’m representing myself and my support team – everyone that was behind me. “

Plus, she was honored that she had been asked by her command.

“They could have chosen anybody, but they saw something in me.”

That something, she believes, is her “passion for soldiering. Grabbing soldiers under your wing. Teaching them right from wrong, not only teaching them, but showing them what right looks like.”

So here are SFC Danzy’s tips for RSP or Basic.

“When you’re not paying attention to detail, somebody can get hurt. That’s just the business that we’re in.”

“Your drill sergeants will motivate you. You just have to keep up the momentum.”

And another thing SFC Danzy wants you to know: even if feels like it sometimes, drill sergeants are not the enemy.

“We’re supposed to train you, and we’re not trying to be likable. We give you the hard truth of what things are.”

For an example of what that’s like, here’s a video of SFC Danzy in action:

At 37, as SFC Danzy closes in on retiring from the military when she reaches 20 years of service, and turns her focus more toward her civilian career, she plans to get a master’s degree in police graduate studies.

Likewise, she encourages her recruits to make the most of the Guard’s education benefits, which are “hands down our best selling point because education is expensive.” These benefits vary by state, but under the New Jersey ARNG Tuition Waiver Program,  the New Jersey National Guard offers 100 percent free tuition for State schools.

“We don’t cap them on education, so if [Soldiers] want to get two bachelor’s degrees, two master’s degrees, as long as they’re actively drilling, and they’re in good standing, we’ll pay for it.”

So, if you’re interested in what the Guard has to offer, a great way to get started is to look into the Guard’s job board, which outlines all the careers you can train in, from armor and field artillery to aviation or logistics support, just to name a few. And for personalized advice, contact your local recruiter.