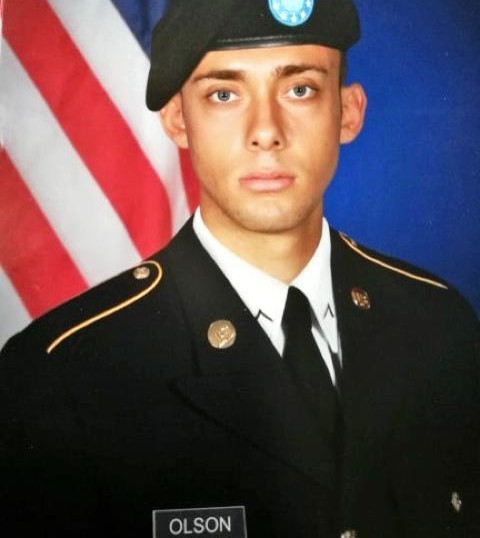 PFC Daniel Olson doesn’t know how his Army National Guard journey will play out. And, he’s happy about that.

In addition to tuition and health care benefits, and the ability to serve his community, access to almost unlimited opportunities is one of the things he loves most about the Army National Guard.

“There are 26 letters of the alphabet. If plan A doesn’t work, there are 25 other plans,” says PFC Olson, who currently works as a Horizontal Construction Engineer (MOS 12N) and a recruiter’s assistant for the New York Army National Guard.

No matter what plan or path he chooses, he knows the Army National Guard will be part of his life for a long time.

PFC Olson was surrounded by military service while growing up. His mother served in the Army National Guard, his father and grandfather were in the Navy, and his uncle was in the Marines for 32 years. He enjoyed hearing the stories his uncle shared.

“He always talked to me about the military,” says PFC Olson. “Seeing his awards and listening to his stories opened my eyes and made me realize I want something like that.”

He knew he wanted to serve his country but wasn’t sure which branch would be the best fit. Then, while in high school, he was inspired by a speaker at a leadership conference. She told a story about how her parents’ home was flooded during Hurricane Katrina and Army National Guard Soldiers helped her family.

“She said a National Guard Soldier carried a fridge out of the basement by himself. She said she’ll never forget what they did for her parents. I thought, ‘That’s awesome. I want to help people,’” says Olson.

After reflecting on his plans for the future, PFC Olson realized he got more than just free pizza out of the recruiting event at his high school. He realized the Army National Guard was the military branch that would best fit his plans: getting a degree and being part of his college's track team while serving in the military part-time.

He is currently attending the State University of New York at Delhi, pursuing a physical education degree. His studies may evolve into a sports management degree so he can get a personal trainer’s license.

All of the Army National Guard benefits are icing on the cake – or cheese on the pizza – for PFC Olson.

“I’m able to stay close to home to attend school locally, pursue my career goals, and serve my country,” he says.

The Army National Guard has also taught the kind of life lessons he was hoping for.

“I actually wanted to better myself as an individual,” he says. “I wanted to become more organized and make sure I was on point and focused when I got to college.”

From Plan A to Plan Z

PFC Olson is enjoying his current MOS and learning the ropes as a recruiter’s assistant. He’s looking forward to gaining even more skills when he deploys for the first time. He will be working along the U.S. southern border for 14 months starting this October.

For now, he is embracing whatever opportunities come his way with an open mind for the future.

He plans on working at least 20 years for the Army National Guard. And no matter what else he pursues over the next two decades, he knows he will be prepared with the communication, leadership, and teamwork skills he has learned so far. He also intends to keep following two key strategies:

“Paying attention to detail and being able to listen are so important,” says PFC Olson. “If you can do those two things, everything else will come.”

If you want to serve your community while also accomplishing your personal goals, check out the Army National Guard, where you’ll serve part-time and receive training in one of more than 130 careers in fields like Intelligence, Heavy Weapons, Ground Forces, and Mechanic and Maintenance. For details on any MOS, search our job board, and contact your local recruiter for more information.