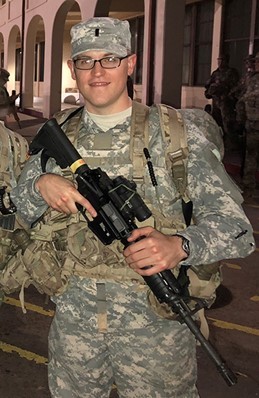 In his eight years of part-time service with the Illinois Army National Guard, Jacob Smith has gotten some big benefits - leadership skills, a sense of direction in his life, and his law degree, completely free, courtesy of the Guard’s education benefits.

And now this former 88M Truck Driver is putting his law degree to work as the newest officer in the Illinois Guard’s Judge Advocate General (JAG) Corps, the branch of the Guard that serves as a legal resource for Soldiers, Guard units and the State Adjutant General.

“It is an interesting contrast,” says 1LT Smith of his switch in military occupational specialties (MOSs) from driving large vehicles to now advising his colleagues on legal matters.

“Being a JAG officer is more applicable to my civilian career,” he says. “It will broaden my base of legal experience and knowledge.”

Growing up, 1LT Smith had positive impressions of becoming an attorney, having worked in his family’s law firm, and of military service because his father had served in active duty Army and later the Illinois Army National Guard.

After starting college, 1LT Smith decided to serve in the military.

“I thought the Guard would be a good way to do both at the same time.”

He chose 88M because Illinois has a lot of transportation units, and the MOS had a relatively short training schedule. His Advanced Individual Training could be squeezed into a summer between semesters, plus he could drill close to school.

And because of his State’s tuition assistance, 1LT Smith estimates he has saved somewhere in the ballpark of $100,000 in tuition for his undergrad and law degrees. On top of that, the GI Bill helped with living expenses while he was in school.

“These are huge benefits on the financial side,” says 1LT Smith, 26, who’s also hoping to take advantage of another Guard benefit in the next couple years - the VA home loan - which allows Soldiers to buy a home with little to no down payment.

1LT Smith, who’s been an attorney since 2017, just recently completed his JAG Corps training, a two-part process. First, he attended a 6-week course at Fort Benning to commission as an officer, and then he spent 10 ½ weeks at the Judge Advocates General’s Legal Center and School in Virginia where he received “a crash course in many types of law.”

In his new JAG Corps unit, 1LT Smith expects to do a fair amount of what’s called administrative law. This includes things like the process of discharging a Soldier from the Guard because of misconduct. In this case, the Soldier would appear before a panel instead of in a courtroom.

“It’s kind of a watered-down version of what you’d imagine a full court martial would be. It’s a more efficient way to deal with misconduct and offenses like that.”

This could include cases involving criminal offenses, which is a departure from 1LT Smith’s full-time civilian law career, where he focuses on business law, estate planning, and commercial real estate and banking matters.

As a JAG officer, he’ll also handling cases related to property law. 1LT Smith explains that typically a commander would conduct an investigation if a sensitive and valuable item like pair of night vision goggles was lost to determine if someone should be held liable. A JAG officer would review the findings to make sure they are appropriate.

One of 1LT Smith’s goals for the future is to deploy overseas and work in operational law: “the laws of war, advising commanders in an overseas environment on all sorts of things from targeting to can you or can you not engage the targets, and what are the repercussions for taking certain actions in a combat environment,” he says. “It’s an area of law where there’s not really a civilian equivalent.”

Overall, 1LT Smith says his time in the Guard has given him direction in his life, great people to serve with and an opportunity to give back.

“The opportunity to serve comes with sacrifices, certainly, but I get to carry on a civilian career and do other things I want to do,” he says. “It adds a lot of value to my life.”

So, if you’re looking for a way to serve your community and your country part-time while you pursue a civilian career, you should speak to an Army National Guard recruiter. Besides outstanding education benefits, the Guard also offers training in more than 130 career fields.