Vermont Soldier Steps up to Serve Above Her Rank 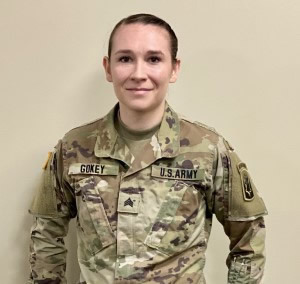 To say Army National Guard Sergeant (SGT) Bailey Gokey is an overachiever would be an understatement.

The Vermont National Guard Soldier is operating two ranks above her current position, taking on more responsibilities for her Unit while managing an active civilian career, all while waiting to officially wear her rank.

“I do operate at a higher level,” she explains. “It’s unique to the National Guard, to put people in a position even before they wear the rank.”

SGT Gokey has earned the rank of Sergeant First Class (SFC) and now sits in that position, but due to the COVID-19 pandemic has not been able to attend the school required to officially wear the rank.

“It tends to give people more opportunity to learn the position before they are pinned in it,” she explains of serving in a higher position. “You can try more things that way.”

SGT Gokey was just 17 years old when she joined the Army National Guard in 2012. While in high school, she planned to attend the Norwich University, a military academy in Vermont, to play rugby, but she sustained an injury and was no longer able to play.

Even after she was sidelined by her injury, she still was interested in joining the Army, so she talked to a recruiter and joined the Vermont National Guard.

Her first assignment was as a 68W Health Care Specialist, a medic, and she served in one of the support Units in Vermont.

“Being a medic in the Guard is a great opportunity because you get to work in a variety of Units,” she explains. “It provides a lot of mobility other Soldiers don’t get to have, and you get to know a lot of people and go a lot of places. It is never boring.”

Meanwhile, she continued to pursue her education, taking advantage of the Guard’s education programs, including the online benefit and the post-university discount rate for credits, as well as tuition assistance. She achieved her goal, earning a bachelor’s degree in human services.

In addition to the education benefits provided by the Guard, she also benefited from the Guard’s Leadership Training, which she says helped her to become a better manager in her civilian career where she works as a project manager for a construction company that specializes in lean process management.

“Serving in the Guard allowed me to work with a more diverse community than I would elsewhere,” she explains. The Guard’s Equal Opportunity Leadership Training also helped to boost her civilian resume.

Although she is still a medic, SGT Gokey stepped up to take on an additional role as a 92Y Supply Specialist when her Unit’s full-time Supply Sergeant was non-deployable. She now serves as her Brigade’s medical non-commissioned officer (NCO) as well as the Brigade’s retention NCO, working to counsel and guide other Soldiers.

While both of her careers are challenging, SGT Gokey says balance between civilian work and Guard service has been easily manageable for her.

“I have had great Commands that have been very flexible with my work schedule,” she says. When her civilian career took her to Israel for nine months, her Command made arrangements so that instead of reporting once a month for drills, she could report once every three months for more days.

One of the things she likes most about serving in the Guard is the people, both in her Command and in her community. “It has been so nice to be able to serve my community,” she says.

Recently that service has included helping to manage the COVID-19 pandemic. SGT Gokey worked as a medic in a 400-bed hospital, providing medical services to patients who tested positive for the virus, as well as those who tested negative.

“It felt great to give back to my home community and home State.”

Besides the Guard’s education and training benefits, SGT Gokey also appreciates the Guard’s health insurance benefits, which she says cost less and cover more than plans offered through employers.

Moving forward, SGT Gokey plans to continue with her retention work, which she admits she enjoys even more than being a medic, because she feels she can make more of an impact in the lives of her fellow Soldiers.

She also is looking forward to attending the Army Mountain Warfare School, which was postponed due to the COVID-19 pandemic. The prestigious school is run by the Vermont National Guard and teaches Soldiers how to operate in mountainous terrain.

“It’s a difficult school, but one of the most beautiful training sites.”