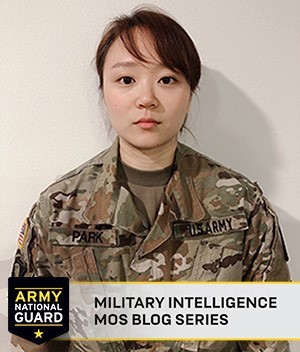 More than any other branch, the Army National Guard offers the most intelligence-related positions. Who are these men and women known as Intelligence Soldiers? Let’s find out. In the following two-part series, Mission:Possible, we talk to two of them and uncover what it’s really like to be the Guard’s biggest asset.

Soldiers often cite ‘traveling the world’ as reason for joining the Army National Guard, but as a young woman, SGT Seunghyun Park, already accomplished that feat. Growing up, she lived in India, Myanmar, and Saipan, among other places.

What she did want … was an education.

“I was admitted to the University of Washington and had no way of financially supporting the expensive tuition. I decided to join the Washington Army National Guard to be more independent, to serve my country and to obtain a higher education,” she says. “But I ended up getting so much more.”

Initially, SGT Park signed up to be an engineer and was deployed to Iraq and Kuwait in that capacity. It was that experience that made her realize that life is short and to be successful, you must pin down what it is you really want to do as fast as you can.

“[The experience] gave me an insight to life more than anything ever could – the camaraderie between brothers and sisters in arms, the appreciation of the smallest things in life, and a fight for a purpose in life,” she says.

While SGT Park enjoyed engineering, it wasn’t her passion. Upon returning stateside, she was determined to pursue her true calling: Intelligence. As she knew a second language, it made it an easier transition. In short, she was needed.

“I joined the Intelligence Community by becoming a Human Intelligence Collector (35 M) with Korean language capabilities for the Army National Guard to pursue a career in the military that was parallel with what I wanted to do,” she says.

So, what does a Human Intelligence Collector like SGT Park do? By gathering information about an adversary’s intentions, strengths, vulnerabilities, and capabilities, SGT Park helps plan, prepare, and defend against potential attacks.

She describes the training as learning how to interact with people with a purpose. On a personal level, this meant she had to become much less gullible than she was before.

“I always tended to believe what people told me,” SGT Park says. “Much of the training was to learn to ask myself ‘are they telling the truth?’ – it made me become even more of an extrovert than I was before.”

Her duties may include interrogating and debriefing as defined by regulation; conducting and supervising tactical and strategic interrogation-related duties; supervising subordinate personnel; developing and approving interrogation plans and missions; advising the support element; and coordinating with other agencies.

“As a Human Intelligence Collector, I’m able to network with phenomenal leaders and peers, get a Top-Secret Clearance and step foot into a realm of the intelligence community,” SGT Park says. “Additionally, I set myself up for success by utilizing every benefit the military could offer me to attend school. I attended school debt free even without using the full extent of my benefits.”

Even though she didn’t know it before becoming a Human Intelligence Collector, having a security clearance has opened a world of doors. SGT Park says that she receives multiple recruiting outreaches from large companies such as Amazon – even with her relative lack of experience.

“I had no idea how important the security clearance would be to my career,” she says.

SGT Park says that being a 35M has boosted her confidence, helped her understand more about how humans communicate, and connected her with the right people to put a foot in the door of the Intelligence Community.

She is now earning a bachelor’s degree in Cybersecurity and will no doubt be a sought-after candidate for any position in that realm.

“I’ll definitely come out further than my classmates who did not join the military,” she says. “I wouldn’t be where I am without that experience.”