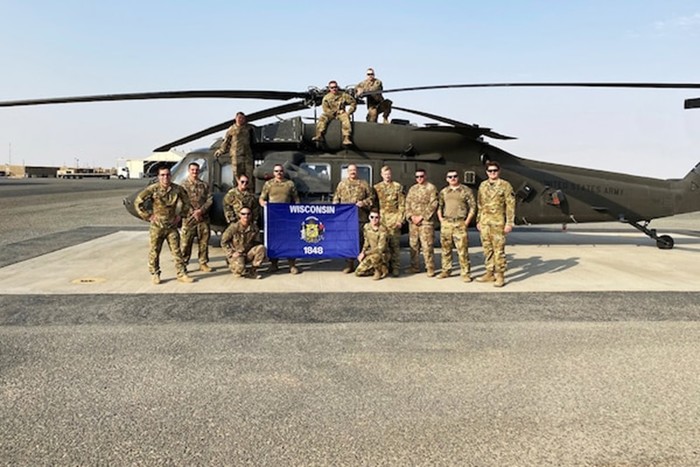 Wisconsin Army National Guard members of the West Bend-based Detachment 1, Company G, 2nd Battalion, 104th Aviation Regiment at a base in the Operation Spartan Shield area of operations. Wisconsin troops have been assigned to locations in Kuwait, Saudi Arabia, and Syria for a medevac mission in the U.S. Central Command theater of operations. (Courtesy photo.)

UNDISCLOSED LOCATION – The Officer in charge of about 35 Wisconsin Army National Guard Soldiers performing medevac missions across the Middle East in support of Operations Inherent Resolve and Spartan Shield reports the deployment is going well.

“We have a disclaimer phrase – deployment experiences may vary,” says CPT Robert Holt of Detachment 1, Company G, 2nd Battalion, 104th Aviation Regiment, which left Wisconsin in June. “Medevac is a pretty unique mission set, where most of the time we find ways to keep ourselves occupied. Overall, we haven’t been super busy, which is a bit of a Catch-22.”

Holt said the medevac mission is more than transporting sick or injured troops – crews have resupplied blood, oxygen, medication, and other critical medical equipment in a deployed setting.

Still, the relatively quiet deployment has allowed plenty of time for training on individual and collective tasks, as well as training events with U.S. ground forces and coalition partner forces.

“During these training events, we showcase our capabilities while completing familiarization training in loading and unloading a litter onto a Black Hawk helicopter,” Holt says. “Recently, we also conducted a realistic critical patient transfer scenario with a coalition partner force surgical team, which resulted in the surgical team revising a few of their practices and procedures to better suit real scenarios.”

The 2nd Battalion, 104th Aviation Regiment, is a Pennsylvania Army National Guard Unit, with subordinate Units in other States, including the detachment for Company G in West Bend, Wisconsin. It is not uncommon for Army National Guard aviation Units to be dispersed across large geographic areas, as this helps distribute helicopter assets across States. But this also meant that Wisconsin National Guard Soldiers were parceled across three sites in three countries and two time zones for this deployment.

“Our aircrews are intermixed with an identical detachment from Nebraska,” Holt explains. “Our maintenance and refueling Soldiers were also absorbed into our Battalion’s D and E companies, and have been split up across multiple locations as well. Keeping track of where all our Soldiers are as they rotate between locations has been one of the most difficult tasks.”

“Each location has found ways to come together as a small family,” he says.

Being away from home for months is difficult, SPC Mikaela Bolker acknowledged, “but FaceTime, letters, social media, and phone calls have helped.”

With reduced demand for medevac missions, Bolker has kept busy with graduate school, fitness, and personal projects. She also brought her violin and uploaded videos of her playing the violin in a hangar.

“My video went viral on Twitter,” she exclaims, noting that her video of the fiddle tune “Devil’s Dream” was retweeted by Command SGM Michael Grinston, the U.S. Army’s senior enlisted leader, and GEN Paul Funk, commanding general of the Army’s Training and Doctrine Command (TRADOC), as well as being displayed on other military social media platforms.

“Being so new in the Guard, I came with so much room to exercise what I learned in (advanced individual training) as a signaler and learn the ins and outs of flight operations in a medevac Unit,” de la Torre says. “I have had the opportunity to learn what options there are in one-off medevac situations, troubleshoot radios, establish communications when they’ve been lost, and so much more. I want to continue to gather as much information as I can. If I’m ever in a tough situation, I want to have the background and experience to have a sense of direction for how to solve it.”

Approximately 40 percent of the Wisconsin Army National Guard Soldiers on this mission had deployment experience, which has proven beneficial.

“One of the biggest assets we’ve had was the level of crew experience we brought,” Holt says. “When we left for deployment, our aircrew members had the highest average of flight hours of any company in our brigade.”

As the deployment winds down, Holt says time seemed to be speeding up.

“We are all looking forward to being home with our families soon and hope that everyone back home is staying happy and healthy,” he says.

The Wisconsin Army National Guard Soldiers are expected to return to Wisconsin this spring.

The Army National Guard offers medical career opportunities that provide essential training in health care procedures and incomparable experience with emergency response, as States call on medical specialists to care for victims during disasters. These professionals perform well under pressure and possess skills that translate to hospital work. Whichever medical career you choose, you can be sure that your job will be as rewarding as it is challenging.

Check out the job board for more information on available careers, and contact a local recruiter to learn more.

From an original article by Vaughn R. Larson, Department of Military Affairs, which appeared in the news section of nationalguard.mil on Feb. 12, 2021.